Deputy Head of Unit in the Directorate-General for Neighborhood and Enlargement Negotiations at the European Commission, Nicholas Cendrowicz has listed judicial independence and political polarization as top challenges for Georgia as the EU membership application process moves forward.

Speaking in a virtual panel discussion organized by the Georgian Young Lawyers’ Association, a local advocacy group, Cendrowicz stressed on May 12 that “the rule of law and the independence of the judiciary is absolutely crucial in deciding whether a country is ready to join the EU.”

He said that the Commission, tasked with preparing an opinion on Georgia’s membership bid, is aware of the “problems of — let’s call it — the politicization of the judiciary and the number of independent bodies” in the country.

“What has happened in Georgia over the past couple of years has not strengthened that independence, I think on the contrary,” the EU representative added.

Besides, Cendrowicz asserted that as regards EU membership it is important that countries can develop a consensus and make decisions “normally,” but the political context in Georgia “is not really conducive to having those kinds of normal, bread and butter and boring discussions about some of the nuts and bolts of the accession process.”

In his address, the EU representative noted that “at some point” the application process also requires making a number of political choices. “Georgia has the capacity and your administration and Ministries do have the capacity to do that, if there is the political will to take these hard choices,” he asserted.

Still, he highlighted some of the strengths of Georgia which the Commission will weigh up in its opinion — is economy and public administration.

Georgia’s economy is “largely aligned” with that of the EU and its public administration “functions quite well,” both being results of a series of reforms, the European Commission representative said.

In this context, he noted that Georgia also has a “very vibrant civil society.”

Although Cendrowicz argued that Georgia must be prepared to do the “hard work and homework” during the EU application process, he asserted that the member states will also consider key political factors, including geopolitical, when deciding on its candidacy.

“The political factors are going to be much, much more important than [whether] Georgia has adopted the directive on the energy efficiency requirements on hair dryers, for instance,” he remarked.

Besides, the EU representative added that the member states do not always follow the European Commission’s recommendations when deciding whether to grant a state the status of a candidate.

For example, the member states may also consider how they feel about Georgia, Ukraine, Russia’s war, and how it has changed the geopolitical balance of power, among other factors, per Cendrowicz.

“This is not a normal enlargement process,” he said. “This is a deeply geopolitical one, and [it] has to be seen in light of the war of aggression which Russia is waging on Ukraine.”

Asked about Georgia’s refusal to join the sanctions against Russia over the war against Ukraine, Cendrowicz responded that the Commission will not “necessarily” consider Tbilisi’s stance when preparing the opinion.

“I think we have a certain amount of understanding of Georgia’s position,” he noted.

“Whilst we understand there are things that Georgia can and cannot do — maybe this is also a question of communication — it is perhaps a bit unseemly that some politicians have presented not total alignment with sanctions as an opportunity for Georgia, and this is something we should be very careful about,” Cendrowicz added, however.

He said that the Commission will mainly look at political and economic criteria when judging Georgia’s application, but added that the EU member states “might have a different view” when it comes to taking into account Georgia’s stance on sanctions.

Tbilisi followed Kyiv’s suit and signed the EU membership application on March 3, in the early days of Russia’s invasion of Ukraine.

Ruling Georgian Dream party’s chair Irakli Kobakhidze cited “overall political context and the new reality” as the reason for the decision to rush filing the application, previously intended for 2024.

The move came amid somewhat strained relations between the GD Government and Brussels, the least because of the controversial Supreme Court and High Council of Justice appointments, GD’s preemptive refusal of conditional EU loan, and Georgia’s alleged spying on western diplomats.

The GD also  unilaterally quit the EU-brokered April 19 deal between governing and opposition parties in July. It also failed the pledge to undertake legal changes under the deal, prompting EU and U.S. criticism. 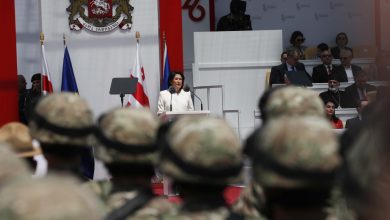