A new public opinion survey released by the International Republican Institute shows that Ukrainian respondents name Georgia among the top countries/organizations that provided the most support to Ukraine in the context of Russian military aggression.

Georgia was the fourth with 17% after Poland (67%), Great Britain (56%), and the United States (54%), as respondents could provide up to three responses to the question.

Canada was the next country, named by 8%, followed by Romania and France with 7% each. Lithuania followed with 4% and NATO was listed by 3%.

Asked how their opinion changed on Georgia since February 24, when Russia began the full-scale attack on Ukraine, 10% said it improved a lot, 19% said improved somewhat, and 40% responded it stayed the same.

Further 15% said their opinion about Georgia worsened somewhat, while 6% said it worsened a lot. 9% gave no answer. 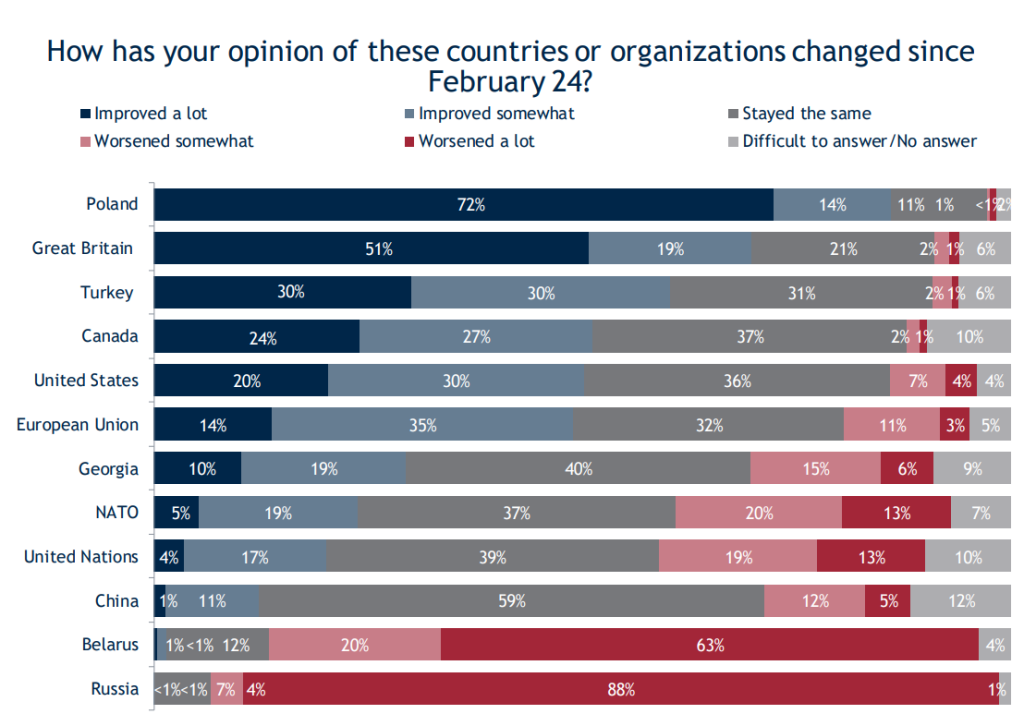 The survey was conducted by the Sociological Group “Rating” on behalf of the Center for Insights in Survey Research Organization of the International Republican Institute (IRI). The fieldwork was carried out during March 30-April 2 period through computer-assisted telephone interviews based on a random sample of mobile phone numbers with 2,001 Ukrainians aged 18 and above.

The survey was conducted throughout Ukraine except for the occupied Crimea, Donetsk, and Luhansk oblasts. The sample excludes Ukrainians currently not in Ukraine. The survey’s margin of error does not exceed 2 percentage points for the full sample. The poll was funded by the U.S. Agency for International Development.