“I see that the readiness to compromise, find middle ground, build bridges is seen as a sign of weakness,” MEP Sven Mikser (S&D, Estonia) told Georgian lawmakers today, stressing the importance to overcome “this attitude.”

“To let political considerations dominate over the common strategic goal of the nation I think something that needs to be avoided at any cost,” the lawmaker highlighted, addressing the joint session of the Parliament’s Foreign Relations and European Integration Committees.

In his speech, MEP Mikser also reminded the lawmakers that the realization of Georgia’s aspirations for EU rapprochement is not limited only to the implementation of the Association Agreement.

He highlighted that the main factor that makes possible the “very strong and nearly consensual” support in the European Parliament and in EU member states of Georgia’s territorial integrity, sovereignty and the right to choose its own alliances is that the country’s aspirations for Euro-Atlantic integration enjoy the “support of vast majority of Georgian people.”

MEP Mikser noted that “poll after poll shows” that Georgian people of all types would like to see the country come closer to Europe and European institutions as well as support the “eventual goal of joining the Euro-Atlantic community as a full member.”

“This makes it easy for us to say that our support to Georgia’s aspirations is not an indication of support of one or the other of political parties or political leaders, but it is support we express to the legitimate aspirations of Georgian people,” MEP Mikser added.

But against this backdrop, he highlighted that “it is imperative that the political class, the political decisionmakers actually live up to the expectations of the people and do not fail the people.”

The MEP stressed that political polarization and antagonism in Georgia has periodically brought the whole political process to a halt. “Such a stalemate, such a continuing standoff obviously hurts those legitimate aspirations of the Georgian people unless it is resolved in a way that allows the political discourse to return to normality,” he noted.

MEP Mikser asserted that while the EU has offered assistance in this regard, it is up to Georgians to resolve such challenges. In the meantime, he said the European Parliament also stands ready to begin the Jean Monnet Dialogue process between the Georgian political parties.

Continuing on the Association Agreement, MEP noted that the everyday issues of the people, such as employment and social welfare, are “at the center” of the implementation of the deal.

He stressed that in tackling such issues in Georgia, both legislative work and efforts by the executive branch are necessary.

Besides, the MEP highlighted that there are “other important principles and conditions that have to be met in order for a country to qualify for the next step in integration,” in the context of standards of the rule of law, institutions, judiciary and the executive branch among others.

Alluding to Georgia’s 2024 EU membership bid, MEP Mikser stressed that negotiations on membership of the bloc is not about “finding middle ground” between the standards of the EU and those of the aspirant country. Citing Estonia’s experience in  joining the bloc, he said the talks were about “raising standards to a level to meet the European standards” instead.

Ahead of his address to the session, MEP Mikser met Georgian Parliament Speaker Shalva Papuashvili and held a joint meeting with opposition lawmakers Tinatin Bokuchava of the United National Movement, Ana Buchukuri of For Georgia, Badri Japaridze of Lelo, Hermann Szabó of Girchi, Teona Akubardia of Strategy Aghmashenebeli, Aleko Elisashvili of Citizens, Pridon Injia of European Socialists and Khatuna Samnidze of Republican Party. 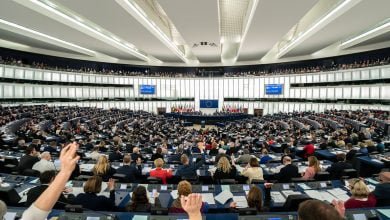