Public Defender Nino Lomjaria unveiled in the small hours of November 23 an updated interim measure by the European Court of Human Rights, in which the Strasbourg-based court instructed the Government of Georgia to follow the advice of doctors group under Public Defender auspices to transfer hunger-striking ex-President Mikheil Saakashvili to multi-profile clinic.

The updated Interim Measure, dated November 19, the day when authorities offered Saakashvili treatment in Gori Military Hospital, says that “a) the applicant needs to immediately call off his hunger strike and b) the Government should provide adequate medical care adapted to the now changed medical circumstances of the applicant, by taking into account the medical opinion of November 17, 2021.”

Instructed by the President of the Chamber, and signed by Section Registrar V. Soloveytchik, the document says the nature of these two separate interim measures are unconditional. 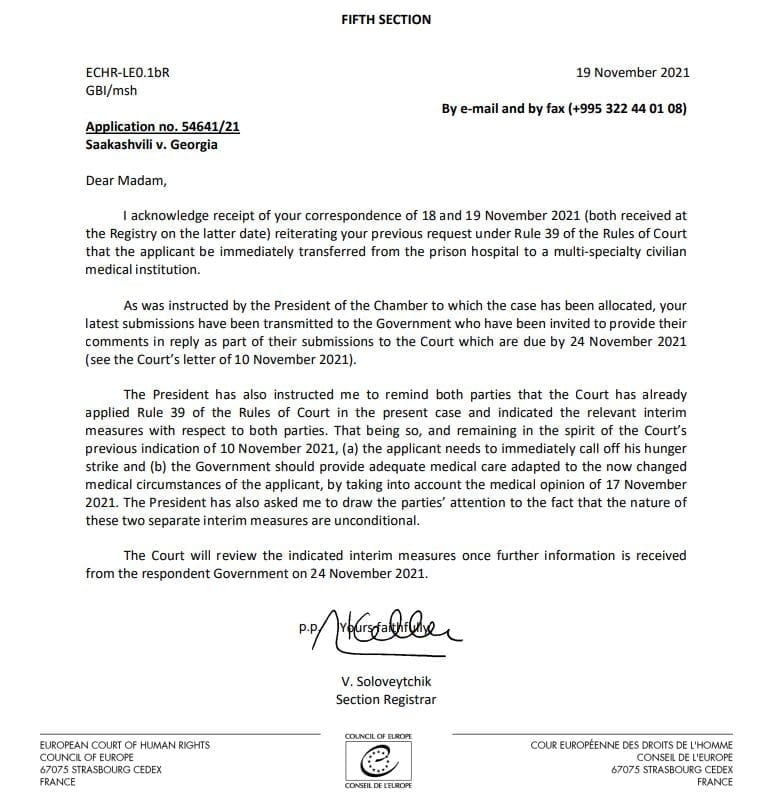 In its first November 10 interim measure on Saakashvili, the ECHR urged ex-President of Georgia to call off his hunger strike, and decided that the Georgian Government should inform it on Saakashvili’s state of health, as well as the medical hospital treatment dispensed in the prison hospital. But it then fell short of tasking the Government to transfer Saakashvili to a multi-profile/civilian clinic from the Gldani prison hospital, where Saakashvili was taken forcibly on November 8.

Public Defender Nino Lomjaria said on her Facebook that while her office just came to know about the updated interim measure on Saakashvili, the authorities may have known about the decision on November 19, or even earlier.