Elene Khoshtaria, senior member of the opposition European Georgia party, announced on December 28 about quitting the party and her plans to establish a new political platform.

Speaking at a news briefing at the party office, Khoshtaria said today that she intends to start an independent political life, adding that she remains committed to the opposition’s decision to boycott the new Parliament.

“I have not changed my political positions. I simply have new plans to create a new political force and I will provide detailed information about my plans to the public [later],” she told reporters.

Khoshtaria said both “resistance movement – activism” and “united, coordinated, principled political process” are needed to confront the “regime” of ruling Georgian Dream party chairperson Bidzina Ivanishvili. She pledged to fight in both ways.

My decision to leave European Georgia is not based on any specific disagreement.I remain strongly committed to the opposition's common battle to end this illegitimate regime&boycott the Parliament.Just have new plans&ideas on how I want to do it through a new political platform

Speaking at the same news briefing, Davit Bakradze, European Georgia chairman, noted that Khoshtaria’s decision “has been no surprise” to her former party colleagues.

Bakradze stressed that Khoshtaria’s departure does not indicate “the process of outflow from the party, as some try to portray” and denied “dirty rumors” that she quit due to a fracture within the party.

The party however joined the other seven opposition parties/blocs that crossed the 1% election threshold in the boycott, demanding revote.

In the October 31 parliamentary elections, Khoshtaria ran in Vake single-mandate majoritarian district on the joint opposition ticket, garnering 35.55% of votes in the first round and refusing to participate in the second round. 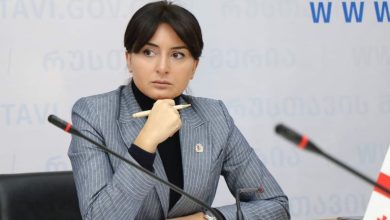