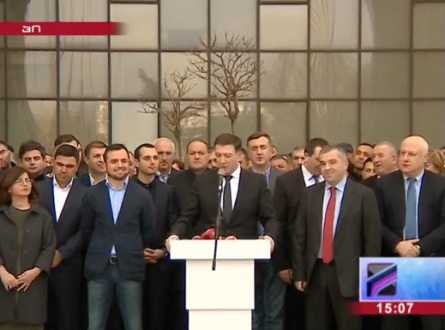 Screengrab from a Press Conference of UNM Leaders on January 12

Some leaders of the United National Movement (UNM), the former ruling and the second largest parliamentary party, announced on January 12 that they will leave the party and start a new political movement, which will start preparations for 2017 Municipal Elections.

The statement came ahead of the party’s contested congress, scheduled for January 20 and a week after the release of Gigi Ugulava, Ex-mayor of Tbilisi and one of the leaders of the United National Movement.

“One person is responsible for dismantling the party – the person, who established the party,” Gigi Ugulava stated, referring to Georgia’s former president and the founder of UNM, Mikheil Saakashvili, who, in Ugulava’s words “no longer radiates leadership.”

“National populism stays on their side and progress and freedom stays on this side,” Ugulava said. “The party that rejects elections as a method of political struggle is no longer a party – and yes, we will prepare for municipal elections,” ex-Mayor of Tbilisi added.

“We are starting a movement from scratch, which will change this wrecked informal regime – I promise,” Ugulava stated when speaking on their position towards the ruling Georgian Dream – Democratic Georgia.

Nika Melia, chairperson of UNM’s 21-member faction, who like MPs Tina Bokuchava, Roman Gotsiridze and Salome Samadashvili opted for staying in the party, and whose possible dismissal from the faction’s chairmanship will be discussed in the near future, was not among them.

“Whatever disagreements might have been between us, these disagreements are already in the past and we, our political team, are looking ahead and beginning to build the future,” Davit Bakradze said in his opening remarks and wished success to those members, who decided to stay in the United National Movement.

Bakradze said that, for years, UNM’s “face, backbone and pillar” was the team, which will continue its political activities separately using its “knowledge and competence”… “which sees Georgia’s future in EU and NATO and “the key task of which will be to end confrontation in the country.” Bakradze added that the team “has come to terms with the past” and that “nobody will be afraid” of its return to power.

“Such a political force is being created today and I am sure that this political force will be successful on the Georgian political arena,” Bakradze stated and added that “it is an not correct to say that a team is leaving the party, because in reality the United National Movement is splitting today.”

Mikheil Saakashvili, who commented on the departure of some of the party leaders with a Facebook post, stated that “the rule of losers is over”. “Our people showed their strength and did not allow the implementation Ivanishvili’s plan to distance me from the United National Movement and take over [the party],” writes ex-President Saakashvili, who is wanted in Georgia for various charges, which he denies as politically motivated.

“Everyone saw the amount of defectors today and everyone will see the strength and the amount of the United National Movement at its January 20 congress … The party is as united and as strong as it has never been in the last four years, since tens of thousands of our activists regained control over the party,” Saakashvili noted.

UNM MP Nika Melia, who opted for staying in the United National Movement, arrived at party headquarters later on the same day, together with supporters. “We respect their opinion – those, who wanted to leave, left the party,” he said and added that he was “sure that many of those people, who may consider themselves as members of their team,” would “change their mind soon and return.”

“Ivanishvili’s plan to weaken and disintegrate the National Movement has failed,” he said. “National Movement is the idea of a European, free and successful Georgia and no politician will be able to defeat the idea, no matter how numerous they are.”

Intra-party crisis in UNM emerged in the aftermath of October 8 Parliamentary Elections, with Georgia’s former president and the founder of UNM, Mikheil Saakashvili, who at that time was also the governor of Odessa region in Ukraine, questioning the overall legitimacy of elections and calling for boycotting the results and with most political council members and future MPs under the leadership of Davit Bakradze and Giga Bokeria preferring to enter the parliament and the majoritarian runoffs.

Saakashvili lost the debate then and the political council opted against the boycott, except in Zugdidi, where UNM’s candidate and Mikheil Saakashvili’s wife Sandra Roelofs refused to participate in the second round.

Disagreement resurfaced after the majoritarian runoffs over the decision of the political council to elect a new chairperson. Majority of UNM’s lawmakers were in favor of electing a new chairperson, while some backbenchers, linked to Mikheil Saakashvili and commanding strong loyalty of the party’s mobilized grassroots, demanded to leave the post vacant – after losing Georgian citizenship, Saakashvili was deprived of the right to be a chairperson of a political party in Georgia, but the party decided not to elect the new chairperson.

Opinions varied over the scale of the congress as well: while Mikheil Saakashvili and his sympathizers argued for a large-scale congress, Bokeria-Bakradze’s side backed a more modest gathering on December 27 with participation of 2 158 delegates. The political council’s November 30 decision to hold the congress on January 20 with 7 000 delegates, as ex-President Mikheil Saakashvili desired, did not end the dispute.

The sides disagreed over the the issue of congress organization; while Mikheil Saakashvili and his sympathizers were in favor of conducting the congress on January 20 and were holding preparatory meetings across the country, the other side, under the leadership of Giga Bokeria and Davit Bakradze, questioned its legitimacy and accused Saakashvili of hijacking the congress organization in circumvention of the political council (UNM’s 60-member governing body).