After a series of protest rallies and the opposition’s announced boycotting of the next parliament, the opposition and the ruling Georgian Dream party started on November 12 a political dialogue through the facilitation of foreign diplomats.

Leaders of nine political parties that, according to the Central Election Commission’s preliminary results, managed to pass the 1% election threshold gathered at the residence of U.S. Ambassador Kelly Degnan at midday, with EU Ambassador Carl Hartzell and French Ambassador Diego Colas also in attendance.

Parliament Speaker Archil Talakvadze, who represented the ruling party at the four-hour-long meeting, told reporters afterwards that the first round of talks “has been a positive beginning of political consultations.”

He expressed hope that the sides will achieve important results and bring their positions closer. “We would like to come to a situation with everyone respecting the results of the elections and the Parliament of Georgia continuing its work,” Talakvadze said.

The Parliament Speaker stressed that “dialogue has no alternative. The table of negotiations is the place where politicians should find a common language.”

Davit Bakradze of the European Georgia said that “all responsible political forces” should try to find a compromise, albeit stressing that it cannot be reached at the expense of the country’s interests.

“It is necessary to hold new elections to defuse the political crisis, to consolidate the public and to restore the trust in the election process, that is our position,” Bakradze underscored.

“This process is more difficult than what we had at the beginning of the year that resulted in the March 8 agreement… But, as responsible opposition… we will try to find a compromise,” Bakradze said, adding that the ruling party should also assume its share of responsibility.

Eight opposition parties that passed the election threshold, the United National Movement, European Georgia, Lelo, Girchi, Strategy Aghmashenebeli, Labor party, Citizens and Alliance of Patriots, announced the boycott of the next parliament, with all except the latter holding joint rallies and sporadic demonstrations throughout the country. Alliance of Patriots, the Kremlin-friendly nativist outfit, distanced itself from the rest, announcing separate protest rallies. However, at the meeting at U.S. Ambassador Kelly Degnan’s residence, leaders of the eight parties, as well as GD lawmaker Archil Talakvadze, were all in attendance. 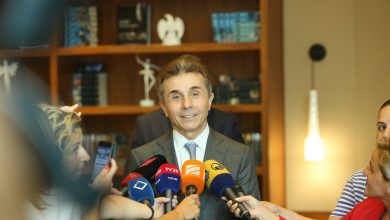 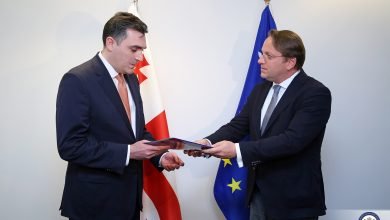