At the Presidential Palace, the two Presidents signed a joint declaration “in support of Georgia’s sovereignty, territorial integrity, European and Euro-Atlantic integration.” In a joint press conference after the signing ceremony, President Zurabishvili highlighted that the document deepens the relationship between the countries while confirming that Lithuania supports Georgia on its European path.

Georgian President underscored the role of EU mediation to end the political crisis in Georgia, stating that political stability in Georgia and the region is important for the EU and highlighted the significance of the forthcoming June 14 NATO summit.

“We talked about the importance of mentioning Georgia and Ukraine in the framework of this summit, as well as underlining NATO’s open-door policy. It is important to get signs on how will we continue our integration path,” President Zurabishvili said.

President Nausėda, in his turn, stated that Lithuania and Georgia, share the same values and face similar external threats. “When I look at Georgia, I remember Lithuania fighting for the membership of the EU and NATO back in time,” Nausėda said, adding that he sees “the same aim and courage” in Georgian people. “For this reason, we signed a joint declaration with the President, which not only supports Georgia’s sovereignty and territorial integrity but also its European and Euro-Atlantic integration,” the Lithuanian President concluded.

The parties also touched upon the situation in the occupied territories of Georgia and the problems of the population living along the occupation line, which the President of Lithuania visited in the village of Khurvaleti yesterday. President Nausėda once more confirmed Lithuania’s strong support for Georgia’s sovereignty and territorial integrity. 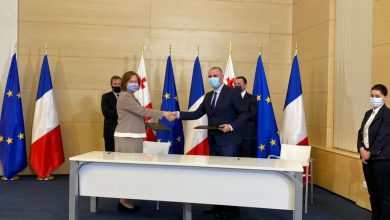