“Georgia’s democracy score is now close to where it was a decade ago,” says the U.S.-based rights watchdog Freedom House in its “Nations in Transit 2021” report, as the country’s ranking fell from 3.25 to 3.18 out of 7 over the past year.

The report, published on April 28, assesses the state of democratic governance in 29 countries in Europe and Eurasia, pertaining to key conditions and developments over the last year. The ratings are based on a scale of 1 to 7, with 1 representing the lowest and 7 the highest level of democratic progress. With its score, Georgia remains in the “transitional government or hybrid regime” category. 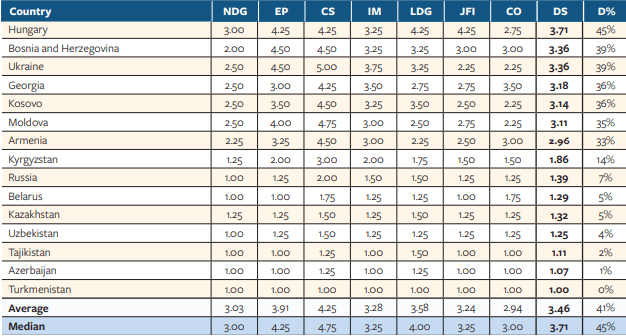 Georgia’s score declined in two indicators – electoral process ranking fell to 3.00 from last year’s 3.25, while its independent media score dropped to 3.50 from 3.75. The rest remain unchanged.

“In Georgia, the opposition’s boycott of 2020 parliamentary elections and the February 2021 arrest of opposition leader Nika Melia clearly demonstrated the end of the country’s recent reform attempts,” the document reads.

Noting that voters in consolidated authoritarian regimes have “no such luxury” to impact election outcomes at the ballot box, the report says it is “all the more tragic when opposition groups in hybrid regimes feel compelled to boycott elections due to dramatically tilted playing fields, as recently occurred in Georgia and Serbia.”

Freedom House adds that the Georgian media environment was “affected by political interference and polarization” over the last year, citing the dismissal of staff members from Adjara TV and Radio Company, a Batumi-based public broadcaster, as “a potent example of the pressure placed on journalists.” Besides, watchdog says, the new legislation enabling state regulator Georgian National Communications Commission “to interfere in broadcasters’ operations” also contributed to the decrease in ranking.

Freedom House will publish the full Nations in Transit 2021 narrative report for Georgia as soon as it becomes available.