The Parliament of Georgia elected today European Socialist MP Avtandil Enukidze, one of the four lawmakers that entered the new parliament through the party-list of his former nativist Alliance of Patriots (AoP) party, as Vice-Speaker with 82 votes in favor.

Enukidze is the first to occupy the Vice-Speaker’s post through opposition quota as the major opposition parties are boycotting the Parliament, citing “fraud” elections on October 31, 2020.

The amendments were decried by some of the major opposition parties and civil society activists as the ruling Georgian Dream party’s attempt to buy off the opposition MPs.

Without the amendments, the four former AoP MPs, including Enukidze, who took up their mandates and went on to establish the new European Socialists party, were barred from higher legislative positions, as at least seven MPs were required to form a parliamentary faction.

The Deputy Chair posts for each of the 15 parliamentary committees, reserved for opposition MPs, still remain vacant. 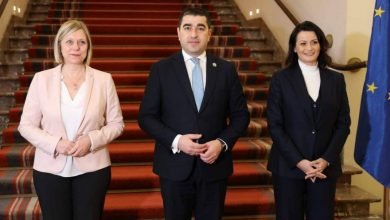