As Georgia inches toward the 2020 elections, Civil Georgia casts your memory back to 2019 and pinpoints seven important topics that are likely to shape this year’s political calendar.

Last year witnessed the beginning of the demise of single most significant economic enterprise in Georgia – the Anaklia Development Consortium (ADC). Founded in 2014, ADC was a joint venture of Conti International and TBC Holding (then led by Mamuka Khazaradze) which won the state contract to build and operate the deep sea port in 2016.

First storm clouds started gathering over the harbor exactly a year ago, when the Prosecutor’s Office announced that TBC Bank, the leading Georgian banking company, was facing a criminal investigation over money-laundering allegations. In summer, trying to shield the ADC from reputational damage, TBC’s Mamuka Khazaradze and Badri Japaridze (now leaders of the newly founded “Lelo for Georgia“ party) quit the ADC’s Supervisory Board.

In mid-August Conti International announced its decision to quit the Consortium. This move, reportedly, stemmed from lack of agreement between the government and international financial institutions.

The Ministry of Infrastructure expressed concerns over the fate of this grand financial undertaking, which, according to the body, remained underdeveloped and under-capitalized in the hands of ADC. The Consortium representatives, in contrast, have spoken out against government’s meddling, accusing the cabinet of sabotaging the project.

On January 9, 2020 the Government of Georgia has decided to terminate its contract with the ADC. Minister of Infrastructure Maia Tskitishvili said that despite delays and even though the government pardoned ADC some outstanding tax payments, the Consortium failed to meet its contractual responsibilities. ADC said they will seek international arbitration.

ADC’s grim fate is the hot-button issue that commences the new political year in Georgia. It seems all doom and gloom at the shores of Anaklia right now. Will we see a new consortium formed? Will – as some fear – Russian, Chinese or unidentified off-shore companies step in, signalling geopolitical games? These are some of more immediate questions.

The Top Court to Be Packed

In 2019 Georgian public took an unusually high level of interest in matters judicial. As the [heavily] amended Constitution came into force in December 2018, the Georgian Parliament was entitled to fill 20 vacant seats on the top bench for lifetime tenure. The High Council of Justice (HCoJ), a body overseeing candidates’ selection, fast-tracked the process settling for a relatively tight time-span.

Nevertheless, the parliamentary hearings did not go smoothly as opposition groups (including former ruling party deputies) grilled the nominees and, dismayed, boycotted the vote. Many prominent Georgian CSOs came together and raised the alarm, bemoaning mostly pro-forma application of competition procedures and “clan-based governance” of the judicial system – in other words, few well-connected judges pulling the strings on behalf of the powers that be. The shortcomings in nomination and appointment of the judges were also spurned by the U.S. and the Council of Europe.

On December 12, despite protests, ruling party MPs were whipped into greenlighting  the lifetime appointment of 14 out of 20 nominees, in an effort that is widely seen as packing the courts.

OSCE/ODIHR noted in its report of January 9, 2020 that “political wrangling compromises the independence of appointments to Georgia’s highest court.”

As things stand, HCoJ has already named another six candidates due to be endorsed by the legislative body in 2020. Until now, it is unclear who will take the helm of the controversial top tribunal. Plans to submit the candidates of Supreme Court chair remain up in the air.

Not only the independence of the judiciary now stands compromised, but the Parliament has tied the legal knot that may prove very difficult to untie in the years to come, straddling the judiciary with less than luminary and somewhat tarnished cadre.

June 20 events proved to be an acid test to gauge the limits of freedom of assembly and peaceful protest in Georgia. An alleged protocol blunder, which led Russian Communist-cum-Orthodox MP to deliver his speech from the parliamentary speaker’s chair, turned an otherwise trivial event into a trigger for months-long protests.

On the night of June 20-21, scores of anti-occupation activists and ordinary citizens gathered in front of the parliament to demand immediate resignation of the chairman, Irakli Kobakhidze, and several government officials. The protest came to a head when some demonstrators attempted to breach the police cordon to get into the Parliament building. Demonstrators clashed with riot police units, which turned to tear gas and rubber bullets to disperse the protesters. Both policemen and protesters were injured, and, due to indiscriminate use of rubber bullets by the police, two people lost one of their eyes.

As the trials proceed to 2020, the Courts are expected to enforce amends for victims and deliver justice. But the expedient nature in which the protesters were tried, and fined, often with thin or no evidence against them, filled the activists with heavy foreboding for the election year.

Fool me once… Broken Promises and 2020 Polls

In late June of 2019, few days after June 20 protests, the ruling Georgian Dream party chairman Bidzina Ivanishvili announced that crucial parliamentary elections in 2020 will be fully proportional with zero threshold.

On November 14, in an unexpected twist, ruling party MPs that usually tread Ivanishvili’s line, failed to endorse the necessary constitutional amendment, backtracking on that promise. This has brought Georgia’s already simmering political brew to the boiling point. Notoriously factional opposition groups came together in outrage, and many protesters hit the streets. Georgia’s international partners, most notably U.S. and EU, were left aghast, as were some of the more presentable ruling party MPs, who left the ranks (and some – the parliament) in furore. 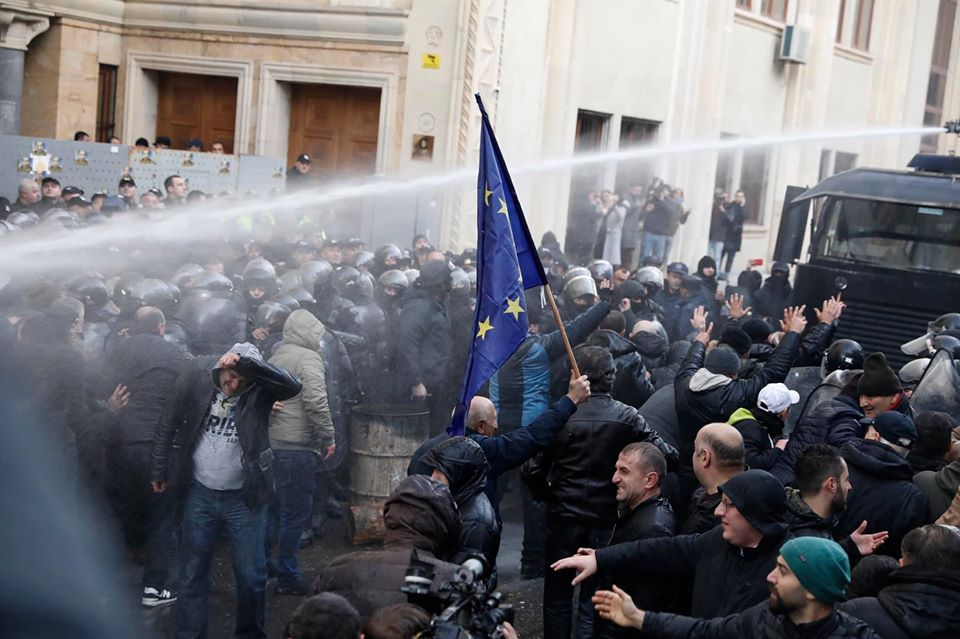 Representatives of virtually all opposition flanks joined their forces to hold talks with ruling party officials. In a united voice, they tabled a proposal that would go some way towards the proportional system (so called “German electoral model”), as a means to find a way out of the gridlock. After much bickering, and international mediation, Speaker Archil Talakvadze,  suggested tweaking the existing mixed electoral system by-reducing the number of majoritarian MPs.

This won’t remove the key problem – the mixed system has traditionally allowed the ruling party to get more than fair share of seats, leading to abusive supermajorities. As the holiday feasting comes to an end, the key protagonists will show how they plumped up for the upcoming fight. For the fight there will be…

Love thy neighbor? Davit Gareji conundrum comes to a head


2019 saw a decades-old hurdle in Georgian-Azerbaijani relations grow into trouble. Tracing back to the shared Soviet past, a border dispute engulfing Davit Gareji Monastery continues to ruffle the feathers of neighboring countries’ populations.

On April 20 President Salome Zurabishvili payed a visit to the Gareji complex, medieval monastic hearth nestled in semi-desert, and called – somewhat abruptly – attention to the demarcation issue between two countries. Zurabishvili’s visit, reportedly, precipitated Azerbaijani border police to close access to the parts of the Monastery.

This has sparked resentment – further fanned by hotheads – among Georgia’s clergymen and laymen alike. In early May, several hundred activists formed a human chain on the premises of the monastery to protest Azerbaijani move. Although Azerbaijan has lifted the entry restrictions the protest rally resumed on May 28.

Davit Zalkaliani, Georgia’s Minister of Foreign Affairs, in a conciliatory vein, stated that both countries were fully committed to carrying out border demarcation. On August 19-23 a working meeting of experts on delimitation was summoned, which set the plans for the next stage to review disputed areas.

Whether the politicians on both sides will handle their fragile friendship – so rare in the region – with proper care remains a pending, troubling question for 2020.

The August 29 meeting of the Incident Prevention and Response Mechanisms (IPRMs) – internationally supervised gathering to handle ongoing security issues – was disrupted, since Tskhinvali representatives insisted the Georgian checkpoint to be dismantled.

A high-stakes game of checkpoint checkers ensued, as the occupation forces tried to outflank the Georgian outpost. In September, occupation forces erected signs to mark “the border” in the Chorchana-Tsnelisi area. The EU monitors confirmed that these pushed the line of occupation 1.3 kilometres into the Tbilisi-administered area.

Officials from Tbilisi, Tskhinvali and the Russian Federation held seven “technical meetings” since than to de-escalate and perhaps thrash out a consensus, but in vain. Checkpoint or no checkpoint, the occupation line is a living, moving proof of ongoing Russian aggression – and Georgia’s (and its friends’) continued impotence to effect change.

Chorchana/Tsnelisi tensions have had very real repercussions for those people that try to scrape a living in occupied territories. On September 3, Tskhinvali “KGB” announced that crossing points in Odzisi and Sinaguri, lifelines for occupied region’s dwellers to Georgia, were to be closed for the foreseeable future.

This cut many Georgian citizens living under occupation from Georgia’s social services. According to the EUMM, Odzisi (Mtskheta district) crossing point, serving residents of occupied Akhalgori Municipality, 55% of which are ethnic Georgians, was habitually used 400 times daily.

The closure has turned fatal for an Akhalgori resident Margo Martiashvili, who, in an urgent need of medical treatment, was unable to reach Tbilisi and passed away in Tskhinvali’s hospital.

Detention of a well-known Georgian doctor Vazha Gaprindashvili by occupation forces in November, who was released after two months of custody in occupied Tskhinvali, served as yet another painful remainder to both, Georgians and international community alike that that “the complete ban on movement” between the occupied region and Georgia proper, “is undermining the human rights of local civilians.”

On December 27, Tskhinvali’s “State Security Service” circulated the news that the sole remaining crossing point in the village Karzmani would cease functioning during New Year’s celebrations.

Whether the crossing points can be reopened remains to be resolved in 2020. Until then, civilians struggle to survive Tskhinvali-imposed chokehold.