The Georgian Orthodox Patriarch Ilia II has sent a letter to Prime Minister Giorgi Gakharia over the situation at David Gareji Monastery Complex located on the disputed section of the Georgian-Azerbaijani state border.

The letter dated October 1 was published on the Patriarchate’s website on October 8. It notes that due to the Azerbaijani side’s actions, since the beginning of 2019, tourists, parish and clerics have been restricted access to the Udabno and Cichkhituri churches of the Monastery Complex.

The Patriarch refers to various legal documents approved during Soviet and post-Soviet periods, saying that the Udabno and Chichkhituri churches are located on the territory of Georgia and they belong to the Georgian Orthodox Church.

We call for restoration of previous status quo until the process of delimitation and demarcation is over to ensure that clerics, parish and tourists do not face any problems when visiting the Udabno and Chichkhituri churches, especially as maintenance of factual situation on the ground is an obligation set by international law, and changing the situation without agreement with the other state and especially by force is inadmissible,” the Patriarch wrote.

Georgian Patriarch Ilia II send a similar letter to Allahshükür Hummat Pashazade, head of Administration of Muslims of the Caucasus, on October 4.

Lack of agreement on where the border between the two countries passes came into a sharp focus in the end of April, when Azerbaijani border guards restricted access to parts of David Gareji Monastery Complex.

Although the restrictions were soon lifted, activists and local residents, as well as some nationalists rallied, claiming Georgia’s rights to the disputed section.

Georgian-Azerbaijani commission, tasked with border delimitation between the two countries, met on May 14 first and later on May 23-24 in Baku.

The tensions further escalated on May 28 and Georgian Orthodox clerics, their parish, ordinary citizens and civil rights activists held another rally.

Two thirds of the border between Georgia and Azerbaijan has been agreed. One third of the border, where David Gareji Monastery is located, has yet to be agreed.

On October 6, the State Border Service of Azerbaijan opened a border post on the territory adjacent to David Gareji Monastery Complex. The Georgian government has made no comment on the issue so far.

Georgian PM Giorgi Gakharia, who is paying an official visit to Baku on October 9, met with Azerbaijani President Ilham Aliyev. However, the Georgian PM’s office has not made any comments whether the two leaders discussed the border delimitation issues. 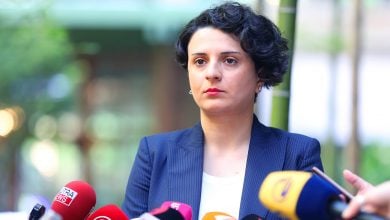