After a nearly three-year dispute, the Tbilisi City Court on May 20 acquitted Ilia Jishkariani, a former member of Tbilisi City Council (Sakrebulo), on charges of sexual and physical violence against Tamta Todadze, a member of his staff.

Baia Pataraia, head of Sapari, a local civil society organization protecting Todadze’s rights in court, said that “despite a lot of evidence”, judge Lia Orkodashvili — “a member of the judicial clan” — still cleared the former GD politician of all charges.

“There is no justice in this country… We will fight to the end and even go to Strasbourg… Nobody can change the truth! Nobody can cover up the truth,” she wrote on her Facebook page.

After the ruling, Ilia Jishkariani was cited by the Interpressnews agency as saying that the “dirt throwing” had been aimed at discrediting him as a politician.

Tamta Todadze first accused Jishkiariani of sexual and physical violence on October 4, 2019, in comments to the government-critical Mtavari Arkhi TV.

She told the TV channel that the Tbilisi Councilor had tried to have sexual intercourse with her, and after she refused, Jishkariani attacked her and broke her mobile phone.

The Prosecutor’s Office brought charges against Jishkariani only some ten days after the alleged incident, on October 8. On the same day, the prosecution granted the status of a victim to Tamta Todadze.

The investigation was launched under Article 138 (2b) and Article 126 (1) of the Criminal Code of Georgia, involving a violent act of sexual nature committed by abusing one’s official position, as well as beating or other violence.

On October 11, the Court set bail of GEL 10 thousand (USD 3.4 thousand) and issued a restraining order for Jishkariani. 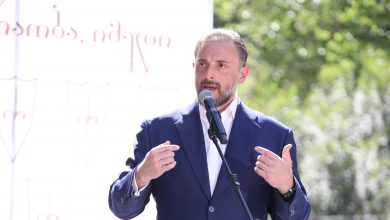