A new public opinion poll, commissioned by the International Republican Institute and released on August 2, revealed that 62% of respondents believe Georgia is heading into wrong direction (up from 59% in February), as opposed to 26% that say the country is going into right direction (down from 30% in Feb 2021).

The poll was coordinated by Baltic Surveys/The Gallup Organization for the International Republican Institute (IRI) and the fieldwork was carried out by the Institute of Polling and Marketing during June 15-30 period through face-to-face interviews with 1,500 respondents and has a margin of error of plus/minus 2.5%. The survey was funded by the US Agency for International Development.

As the poll was carried out in June, it does not take into account unchecked homophobic violence of July 5-6 in Tbilisi, the suspicious death of cameraman Aleksandre Lashkarava, and the Georgian Dream’s decision of July 28 to withdraw from EU-brokered April 19 agreement.

16% of respondents said their households’ economic situation in the last 12 months worsened a lot, while 30% said it worsened somewhat. For 45% it remained the same, while it improved only for 7%.

Answering which are the most important problems Georgia faces today, unemployment was the first mention (out of two spontaneous answers) for 45%, followed by cost of living/high prices was for 20% and poverty for 8%.

Regarding the most important problems facing their households, unemployment, cost of living and poverty got top first mentions with 28%, 25% and 8%, respectively, followed by healthcare – 7%, pensions and housing with 3% each.

Asked which party they would vote for in the upcoming October 2, 2021 local elections, 28% named the ruling Georgian Dream party as their first choice, 15% named the United National Movement, former ruling party, and 9% named For Georgia party by ex-Prime Minister Giorgi Gakharia. The latter enjoyed highest 9% as the second choice.

18% of respondents said they don’t know, 6% refused to answer, and further 4% stated they would spoil the ballot. 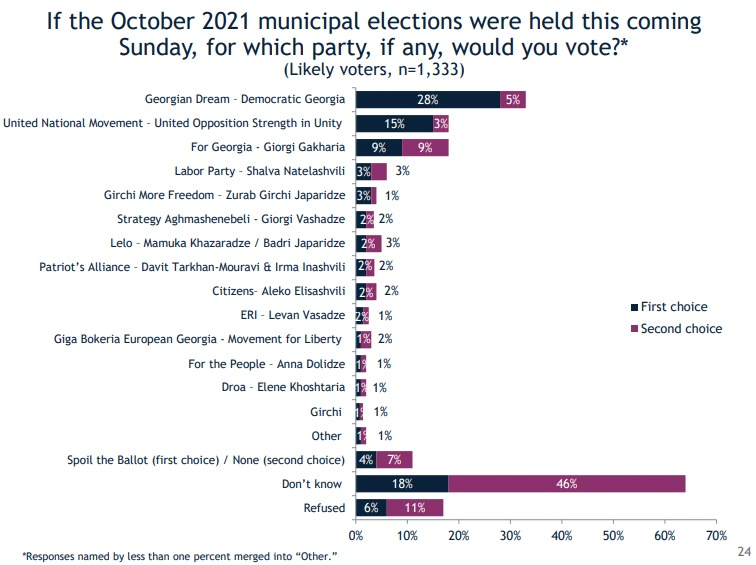 Asked which parties they would not vote under any circumstances, 30% said the UNM, 24% named GD, and 10% named right-libertarian Girchi and Kremlin-friendly Alliance of Patriots, each.

Regarding much discussed snap parliamentary elections, 51% of the respondents support the opposition’s demand for the snap polls, while 39% does not support. 10% don’t know/refuse to answer.

62% of those interviewed said they heard of the EU-brokered April 19 agreement between the Georgian Dream and opposition parties, of which 77% agreed the decision of parties to sign the accord. The Georgian Dream and For Georgia party sympathizers were most likely to approve the signing. 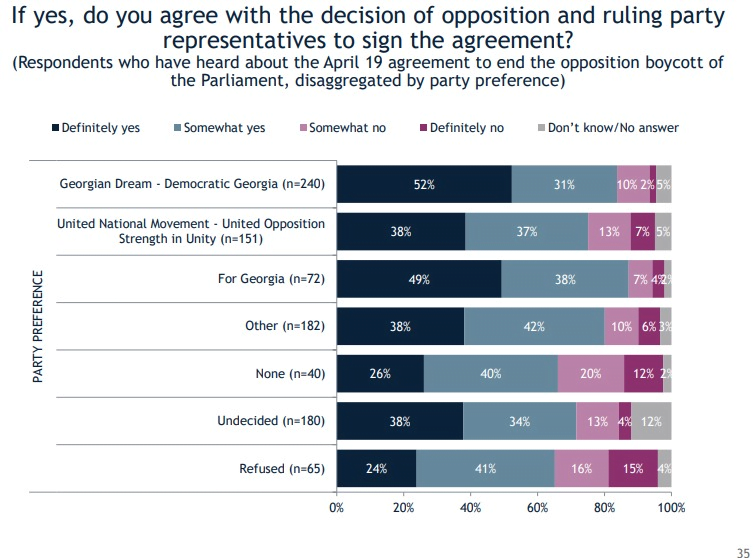 Further, 41% trust the Central Election Commission, while 43% has no or little confidence in the CEC. 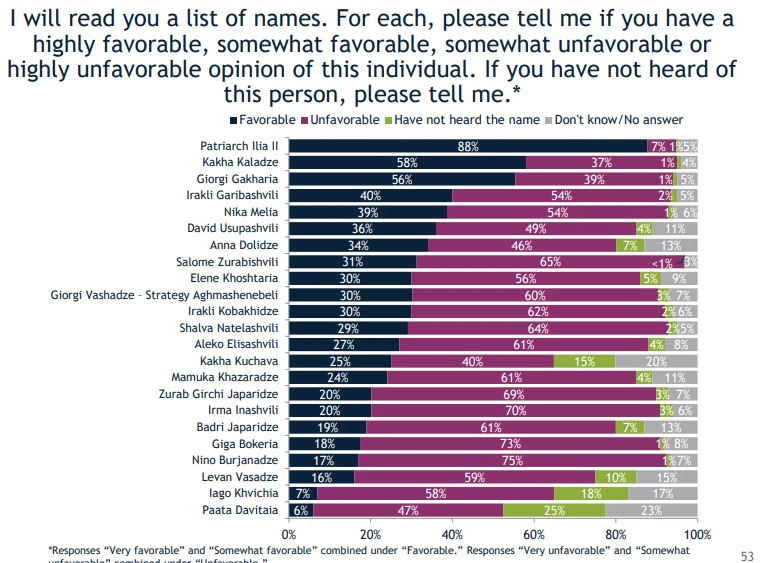 Among the institutions, Georgian army is most favorable with 85% for the public, followed by 80% favorability for the Georgian Orthodox Church Patriarchate. 14% finds the patriarchate unfavorable. Public Service Halls and Police follow the favorability rankings, with 76% and 65%, respectively. Georgian Parliament and Prime Minister’s Office enjoy 39% favorability, while courts have 33% favorability (while 58% find the judiciary unfavorable). 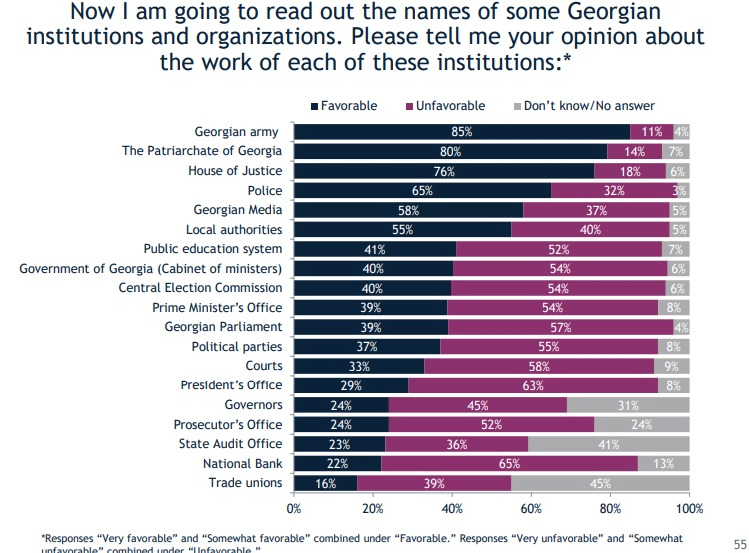 77% of respondents said that democracy is the best possible form of government. Asked whether they are satisfied with the current state of democracy in the country, 11% strongly agreed, 34% agreed somewhat (45 agree in total), while 29% strongly disagreed, and 22% somewhat disagreed (51% disagreed in total).

Further, 61% of respondents said Georgia is heading more towards polarization. Absolute majority, 97% said polarization is a bad development for the country’s politics.

72% of respondents said TV shows are the primary means for them to get political party messages most often, followed by social media channels with 16%.

Asked what policies would determine their vote the most, 67% said party’s economic policy, followed by party’s healthcare and social security vision with 48% (respondents could choose 2 answers).

65% said there is at least one political party that completely or somewhat represents their interests, with 31% answering somewhat or completely no to the question.

77% agree to the statement that “it is healthy for Georgia’s democracy to have multiple parties in power.”