Karen Donfried, the nominee for the U.S. Assistant State Secretary for European and Eurasian Affairs, said on July 20 she would “push for the full and prompt implementation” of the EU-mediated April 19 agreement in Georgia, if confirmed to the post.

“I cannot underscore enough how important electoral reform and judicial reform is for Georgia,” the nominee stressed. She said she would also urge all political parties to support the deal, signed in April by the ruling Georgian Dream and most opposition parties except the United National Movement.

Noting that Georgia has already made “substantial strides” to strengthen its democracy, Donfried stressed that “it has much more distance to travel.”

She said she would also reaffirm U.S. support for Georgia’s territorial integrity and sovereignty, as well as its integration in the Euro-Atlantic community, “which is tied to” the strength of its democracy.

In her remarks, Donfried was responding to ranking member Senator Jim Risch (R-ID), who asked her to comment on Georgia.

Senator Risch, on his part, said he and Senator Jeanne Shaheen (D-N.H.) had thought the October 2012 general polls, which resulted in the transfer of power from the United National Movement to Georgian Dream, “were a new dawn and a new beginning.” “After that, we have been regularly disappointed as to what happens there,” he stressed.

The senior lawmaker said the U.S. legislators “are not going to take sides” in the country’s political developments, despite Georgian parties engaging them for support “in their political maneuvering.” He stressed that Georgian politicians have to resolve the country’s issues themselves.

“But they are not making much progress. You get to a point where you wonder whether or not it is time to reevaluate where we are with this,” the U.S. Senator noted.

Earlier, in his opening remarks of the hearing, Senator Risch said he is “increasingly worried by the steps backward” in Georgia, including the assault on more than 50 journalists during the homophobic pogroms of July 5, and the six judges being “pushed onto” the Supreme Court “in contravention” of the April 19 deal.

U.S. President Joe Biden’s nominee for the Assistant State Secretary for European and Eurasian Affairs, Karen Donfried has served since 2014 as the president of the U.S. German Marshall Fund, a nonprofit dedicated to strengthening transatlantic cooperation. She holds a Ph.D. and MA from the Fletcher School of Law and Diplomacy at Tufts University. 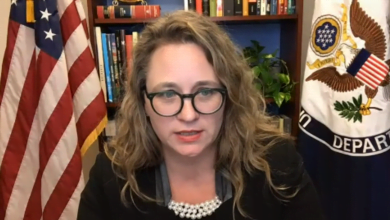