The Interior Ministry reported on July 18 police have arrested one for selling heroin to Aleksandre Lashkarava, a day before the TV Pirveli cameraman assaulted brutally by far-right radicals during July 5 homophobic pogroms was found dead.

The police statement said the suspect is charged for illegal purchase, keeping and selling of drugs in especially large quantities, and faces a prison term of 8 to 20 years or a life sentence.

The development followed an interim chemical expertise report of July 12 that suggested the TV Pirveli cameraman could have died of a drug overdose, and listed off some five substances found in the man’s corpse. They included cannabis and several opiates.

The journalist’s family, friends, colleagues, opposition politicians and civic activists have all voiced distrust in the investigation, and accuse the Government of attempting to discredit the deceased journalist.

Lashkarava’s family has noted he was prescribed morphine by doctors to treat the pain stemming from severe injuries received during the brutal assault, including facial fractures.

As of July 19, police have arrested five suspects in connection with the assault on Lashkarava, which took place amid homophobic pogroms of July 5 during the counterprotest to Pride March, an event canceled subsequently due to the outbreak of mass violence and lack of safety guarantees by the state. TV Pirveli reporter Miranda Baghaturia, who worked with Lashkarava during the incident, said at least twenty people were involved in the attack.

Lashkarava’s death on July 11 immediately spurred a public outrage and protests, exacerbated later by the Interior Ministry suggesting on the same day that the journalist could have overdosed.

The protests have taken many forms over the week, with rallies held, several TV channels going off the air for 24 hours, and journalists interrupting several Government press briefings throughout Georgia.

Scores of protesters, including media professionals, rallied outside the Parliament building on July 17, again demanding the resignation of Government and holding perpetrators of the July 5 violence responsible.

Prime Minister Irakli Garibashvili has rejected the calls for resignation, and instead shot back by arguing the key government-critical TV outlets Mtavari Arkhi, TV Pirveli and Formula are “run” by ex-President Mikheil Saakashvili and by “stolen funds.”

The developments also sparked a standoff between the ruling Georgian Dream party and opposition lawmakers at the Parliament, when opposition MPs interrupted in protest on July 18 Interior Minister Vakhtang Gomelauri, who was addressing the legislature about the July 5 events.

The opposition lawmakers held up photos depicting Lashkarava’s injuries following the assault by the far-right mob, demanding the resignation of the Interior Minister.

Journalists, covering the hearing in the plenary hall, hanged a banner perpetrators of July 5 violence must be punished, and that the Government “must take responsibility” for the events.

Parliament Speaker Kakha Kuchava announced the hearing would be canceled, after the ruling party’s call for taking down the protest banner was rejected. 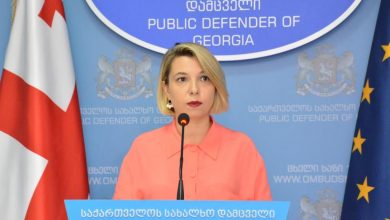