Two civil society organizations have severed ties with the Save Rioni Valley movement, at the forefront against the eight-month-long protest against the construction of Namakhvani HPP in western Georgia, over their participation in a July 5 anti-Pride rally and anti-LGBT rhetorics.

Social Justice Center and Green Alternative said they cannot continue cooperating with the movement after its leaders attended the Church-organized protest prayer in Tbilisi, amid various homophobic groups’ violence spree against journalists.

The movement leaders choosing to “stand on the side of the anti-democratic and inhumane forces” rendered our alliance in the fight against “unfair” energy policy impossible, stated the Social Justice center on July 6.

Green Alternative argued on July 6 the Riony Valley activists “discredited” their movement by participating in the counterprotest, and took an “unacceptable” stance against Pride.

The latter referred to a July 2 statement by Save Rioni Valley that argued the LGBT+ rights issue had become a tool of “political blackmail.” Chastising Pride Week, the movement said the event was “clearly propaganda for non-traditional lifestyle” and “went against public opinion.”

The controversial statement became subject to criticism from LGBT+ rights activists as well, including the Director of Tbilisi Pride, Giorgi Tabagari who said his expectations about the Namakhvani movement leaders “were not met.” Previously, key LGBT+ rights groups, Tbilisi Pride and Equality Movement, had backed the Save Rioni Valley movement’s cause.

While the violent events unfolded in Tbilisi on July 5, Varlam Goletiani, Namakhvani activist leader denounced the attacks that took place and disavowed the hate groups. He stressed the Save Rioni Valley movement leaders had merely answered the Church’s call to peaceful protest.

Tensions between LGBT+ friendly groups and the Save Rioni Valley movement first arose in May, when the Namakhvani protest leaders arrived from western Georgia to Tbilisi and rallied for several days.

The protests, enjoying support from both progressives and ultraconservatives, were marred by two incidents as a hate group leader in attendance, Guram Palavandishvili, confronted Shame Movement activists for wearing a rainbow armband, and forced them to leave. In another reported incident, Palavandishvili and his son allegedly tore apart a banner held by LGBT+ activists.

Namakhvani protest leader Varlam Goletiani had disavowed violence, and called for tolerance and unity at the rallies. “We will defend the right [to protest] of every person that comes here … if we want to unite we must be able to stand together,” he asserted on May 25.

Namakhvani HPP is a major project in western Georgia’s Rioni Valley, through which the government hopes to enhance its energy security. But locals, activists and CSOs cite environmental issues as well as contractual terms with the private investor as a risk. A mediation process is underway, and the authorities have voiced plans to review the existing contract. 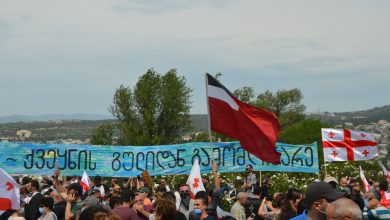