Foreign direct investments (FDI) in Georgia reached USD 302.6 million in the third quarter of 2020, a 23.6% decrease compared to the same period last year, according to the preliminary data released by the National Statistics Office of Georgia (Geostat) on December 9.

Decrease of foreign direct investments in hotels and restaurants, transport, and real estate drove the decline of the total figure, Geostat said.

However, the amount of FDI in Q3 2020 is up 25.2% from the preliminary data of the second quarter of this year.

The largest amount of FDI came from the United Kingdom – USD 117.7 million, followed by the Netherlands – USD 79.3 million and the United States – USD 24.2 million. 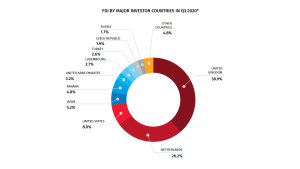