On January 30 Caucasus Research Resource Center (CRRC), a think-tank, released results of its nationwide biannual survey in Armenia and Georgia – Caucasus Barometer 2019. First conducted in 2008, Caucasus Barometer covers a wide array of issues, including health, welfare, social attitudes, migration, conflicts, foreign and domestic policy. Civil Georgia put together main takeaways from the opinion poll, which, if pieced together, draw a portrait of Georgian society, meandering along the path of transformation.

In everyday life, self-perception plays a major part in shaping attitudes and behavior. By the same token, it speaks volumes about the state of body politic. In 2019, one in two respondents described Georgia as a democracy with major flaws. In turn, a quarter of Georgians viewed the country as a democracy with minor troubles. Only a tiny 4 % of the population subscribed to the view that Georgia is a full democracy.

This distribution is fairly uniform when broken down according to respondents’ age, sex, settlement type and education. What’s more, a global trend of disillusionment with democracy has found a faint echo in Georgian society. In 2012, 68 % of respondents embraced democracy as preferable to any other form of government. Seven years later, support of democracy has shrunk to roughly half of the population. Interestingly, over the course of last decade a sizable group of Georgians (around 30 %) have remained indifferent to democracy or avoided stating their position.

Rati Shubladze, CRRC researcher, draws parallels between the decline in democracy perception and growing public distrust towards state institutions. Indeed, a quick glance at the charts is enough to get the picture – people who have little or no confidence in government and its policies (healthcare, educational, judicial) are more prone to assess Georgia as less democratic. As the public has become increasingly distrustful of ruling politicians and their actions, it comes as no surprise that Georgians’ self-image has grown bleaker.

Zero Friends and One Big Foe

Many Georgians would answer eagerly whom they consider their best friend – a caring sibling, a childhood confidant or a trusted mentor. Only few would babble at length on the topic of his or her individual enemies. Yet exact opposite could be said if the objects are scaled up to the level of the whole countries.

According to the 2019 Barometer, public felt at sea when asked to name the chief benefactor of Georgia. Close to one fourth of the population said that “Georgia had no friends”, while one-in-five stuck to “don’t know.” There is a ten-point drop (compared to 2013) in the share of people who deem the U.S. as the main partner of Georgia. It should be noted that Russia’s standing as a friend has also deteriorated, sinking to the bottom 3 %. 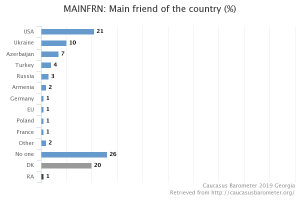 On the other hand, Georgians don’t hesitate to point an accusatory finger at Russia as the country’s major enemy. Perception that northern neighbor poses biggest threat to Georgia has climbed from 35 % (in 2015) to 49 % in 2019. Here, differences per age, settlement type and level of instruction are quite pronounced – young Tbilisites with higher education tend to be most averse to Russia. By contrast, senior citizens living far from the capital and respondents with secondary or lower-level education are much more reluctant to take sides in the matter. 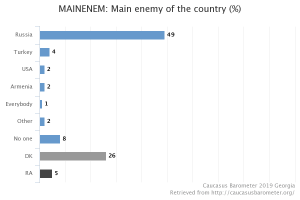 That population became more hesitant to name Georgia’s foreign well-wishers fits well into the general pattern of all-round skepticism. Shubladze says Georgians may feel frustration as it becomes obvious that Georgia’s path to Euro-Atlantic integration is not as straightforward as the politicians seemed to suggest. To sum up, when lining up their foreign policy preferences, Georgians are more guided by the source of threat and less by perceived amity.

Still, as another poll by CRRC has attested, respondents’ approval of government’s stated goal to join the EU and the NATO remains unwavering. Caucasus Barometer delved into the motivating forces of the solid public support. Half of the respondents who back EU membership stated that it would “ameliorate people’s economic conditions.” Economic reasoning is also apparent among the supporters of joining the NATO (one-in-five replied so). Both EU and NATO naysayers opted for a rather vague explanation that “the membership would not benefit Georgia.”

Discrete Charm of the Confederation

As the 2019 survey has shown, public attitudes are slowly shifting vis-à-vis political future of Georgia’s occupied regions. Opinion that Abkhazia should be a formal part of Georgia, but without any degree of autonomy enjoys strongest support at 70 %. By comparison, when the same respondents were asked whether they would accept granting a high degree of autonomy to the westernmost region – more than a half endorsed the suggestion (29 % fully and 38 % – under certain circumstances). From 2013 to 2019, objection to establishing a confederation state between Georgia and Abkhazia (that is, envisaging highest level of home rule) subsided by 17 percentage points. In the meantime, share of respondents who fully favor the said scenario doubled, although to a meagre 14 %. As for Tskhinvali region/South Ossetia, a fifth of Georgians approve consenting to it a high degree of autonomy. Another 36 % of the population go along with the same statement, albeit under certain conditions.

With that said, Georgians are adamant when it comes to Abkhazia’s or Tskhinvali’s breaking away from the mother state. A whopping 85 % would never accept Abkhazia becoming an independent country (ditto Tskhinvali Region/South Ossetia). Nevertheless, younger, more well-educated, urbanite Georgians get more conciliatory in their approach to resolving conflicts. Time may account for this measured drift, Shubladze argued. The youth is devoid of vivid memories of nineties’ hostilities, and more pressing issues, such as unemployment, outrank conflicts by their relative importance.

If you skim through CRRC’s data-rich archive, you might conclude that nothing stands as firm and steady in Georgia as declared adherence to established social norms and values. Across all strata of society, people display traditional and conservative leanings with little if any variability. A set of questions on gender issues casts new light on the shift in public attitudes.

These days Georgians are slightly more liberal when the image of an emancipated woman is conjured up. Share of respondents who disapprove of women having premarital sex has decreased from 80 % (in 2010) to 63 %. In a similar vein, 27 % of the population accept women aged 18-25 cohabiting with men without marriage (ten years ago the figure stood at 8 %). Perhaps counter-intuitively, respondents’ sex doesn’t affect responses, yet age, education and settlement type do.

Public mood has also swung with respect to preferred gender of the child, as a majority of the population (57%) stated that they “do not care about” the gender of their offspring. As for the division of family roles, 65 % of Georgians assume that “a man should normally be a breadwinner.” Even so, compared to 2010, share of respondents who support gender equality in this matter has increased twofold reaching 34 %. The survey asked another question to gauge public perception of who actually brings the bacon home. Roughly equal proportions of respondents (36 % and 39 %) said that “a woman” or “a man” is the breadwinner in most of Georgia’s families, while precisely 20 % answered in favor of both sexes.

Disparity between the perception and reality speaks for itself. A data-savvy observer will think twice before jumping to far-reaching conclusions.  However, it is beyond the doubt that Georgians do not always tread the path charted by their long-held beliefs. Shubladze noted, that Georgian society is undergoing a sluggish, yet measurable transition, which is bound to bridge the gap between upheld values and their real-life applications. He referred to adherence to religion and its practice gauged by series of CRRC surveys. Georgians overwhelmingly assign themselves to religious denominations. Nine-in-ten Georgians stated that religion plays very/rather important role in their daily lives. Notwithstanding professed religion, only a mere 16 % of believers attend religious services once or more often per week. Even smaller share (6%) fasts regularly as required by their religious tradition.

Capping the survey, a stand-alone, somewhat quirky question takes the pulse of hopeful Georgians. Nearly seven-in-ten agree with the statement that “eventually, everything will be fine in Georgia.” And so shall we.