The poll, released on May 21, was fielded by CRRC for the NDI between March 28 and April 15. The survey was conducted through nationwide face-to-face interviews (excluding occupied territories) with 2,927 respondents and has an average margin of error plus, minus 2.3%.

According to the survey, the Georgian Dream-Democratic Georgia (GDDG) enjoys the strongest public support with 21% of respondents identifying GDDG as “the party closest” to them, compared to the United National Movement’s (UNM’s) 15%.

They are followed by the European Georgia and the Alliance of Patriots with 4% and 3%, respectively. 12% of respondents either refused to answer or said they did not know which party was closest to them. 37% indicated “no party” to the question, and 8% of respondents named other parties.

In NDI’s December opinion poll, the ruling party was named by 27% of respondents as the party closest to them, compared to UNM’s 12%. European Georgia and Alliance of Patriots had 3% each.

Asked which party they would vote for if parliamentary elections were held tomorrow, 20% of likely voters named Georgian Dream; 15% – UNM; 4% – European Georgia; 4% – Alliance of Patriots; 6% – other parties. 13% of respondents responded “no party” and 27% responded “don’t know.”

According to the survey, the perception of the country’s direction is at its lowest since 2010, with 46% saying Georgia is moving in the wrong direction. Only 25% thinks it is heading in the right direction.

56% believes the government is performing badly, an eight percentage point increase from 48% last December. Only 36 percent assess the government performance positively (44% in December 2018).

Institutions with the highest performance ranking are the Orthodox Church (61%), public service halls (59%), and the army (55%). The lowest performing national institutions are the Chief Prosecutor’s Office, Parliament and the courts, with 14%, 12%, and 12% positive evaluations, respectively.

The job performance of the country’s leaders – Prime Minister, President and Parliament Speaker – is low, with fewer than 20% of respondents evaluating their performance positively. Tbilisi Mayor Kakha Kaladze earned 43% positive evaluation from Tbilisi respondents (down from 53% in March 2018).

A plurality, 46%, believe that the Orthodox Church should have an influence on political decision-making, while 39% believe it should have no influence.

They are followed by Shalva Natelashvili of the Labour Party, President Salome Zurabishvili and Grigol Vashadze of the United National Movement with 28% positive assessments each.

The ruling party leader, Bidzina Ivanishvili tops the list in terms of negative assessments, with 39% saying they have negative attitudes towards him. He is followed by Zurab Japaridze of the New Political Center-Girchi, UNM’s Nika Melia and MP Eka Beselia with 35%, 33% and 33%, respectively.

NDI released the first part of its opinion survey on May 20. The results can be found here. 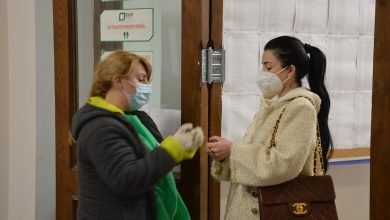