According to a new IRI poll, unveiled late yesterday, 60% of respondents would like to see new political forces emerging in the country, while some 30% are happy with the current choices.

A lengthy public opinion survey tracks Georgians’ opinions over the most pressing problems facing their households and the country, COVID-19 pandemic, and foreign policy issues among others.

Below are some of the key takeaways regarding the respondents’ opinions on the country’s political forces, institutions and public figures.

The poll was coordinated by Baltic Surveys/The Gallup Organization for the International Republican Institute (IRI) and the fieldwork was carried out by the Institute of Polling and Marketing during March 4-24 period through face-to-face interviews with 1,486 respondents and has a margin of error of plus/minus 2.5%. The survey was funded by the US Agency for International Development.

According to the poll, Georgian Orthodox Patriarch Ilia II tops the list of favorable figures with 92%. Some 4% has unfavorable opinion on him.

Among politicians, Tbilisi Mayor Kakha Kaladze has the highest favorability with 53%, followed by President Salome Zurabishvili – 52%, and PM Irakli Garibashvili with 47%. 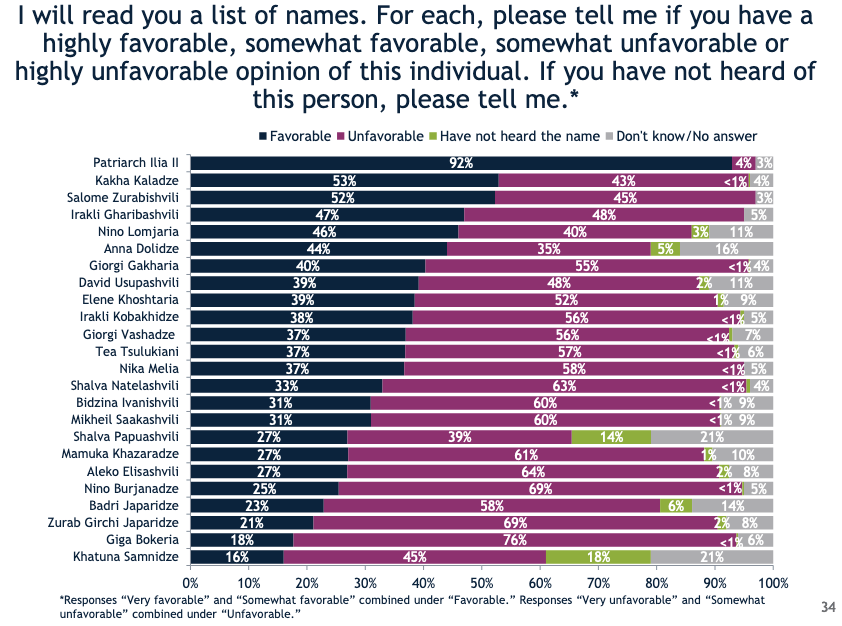 Parliament Speaker Shalva Papuashvili has 27% favorability and 39% unfavorability. 14% has not heard his name. 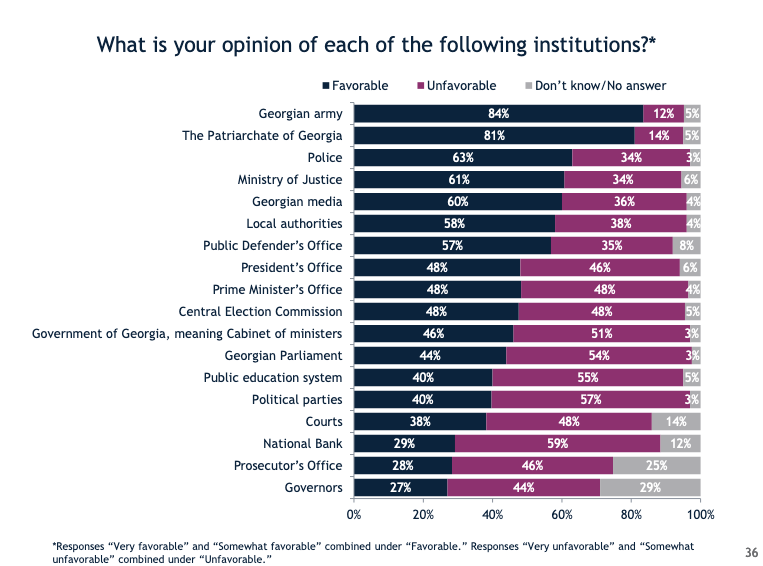 Asked which party they would vote for if parliamentary polls were held the coming Sunday, 31% named the ruling Georgian Dream party as the first choice, followed by the United National Movement with 16%.

Ex-PM Giorgi Gakharia’s For Georgia received 4%, Droa, Strategy Aghmashenebeli, Labor Party, For the People, and Lelo parties were named by 2% each.

Openly Russian-friendly Patriots’ Allinance and Conservative Movement – Alt-Info were named by 1% each.

Girchi More Freedom and Citizens parties similarly were answered by 1% each. Further, 11% would spoil the ballot, 12% responded don’t know, while 7% refused to answer the question. 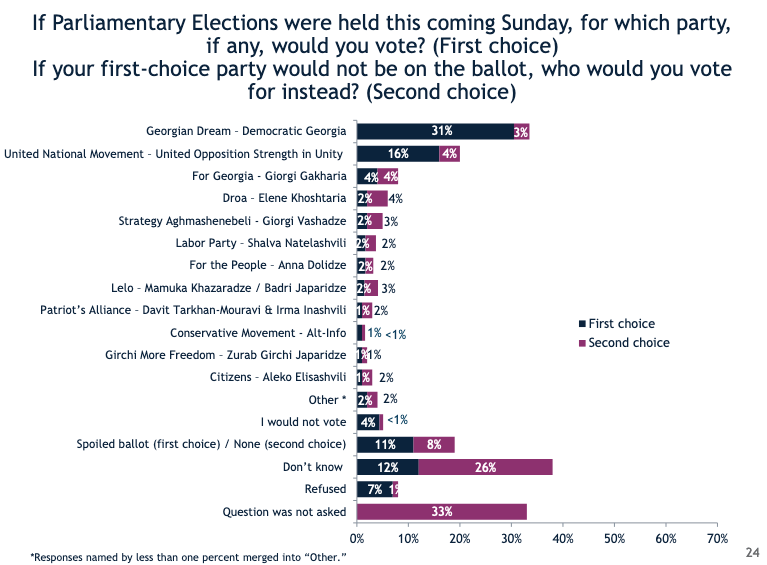 Asked which parties they would not vote for under any circumstances, 35% named the UNM, 27% said the GD, 19% — the Alliance of Patriots. 18% — Girchi, and further 16% named its spin-off Girchi More Freedom (respondents could mark up to three answers).

24% neither support nor sympathizes with any political camps.

Asked to evaluate October 2021 local elections, 32% of respondents said the vote was completely free and fair, 25% noted some problems, but assessed it to be reasonably free and fair. 13% said the elections were not at all free and fair, while 19% evaluated it sufficiently flawed, doubting the accuracy of the results.

54% said they are highly or somewhat confident that the Central Election Commission can organize and supervise credible elections. 41% is having little or no confidence in the CEC in this regard.

The Georgian public is largely divided over the question of the opposition’s demand for snap parliamentary elections.

While the plurality of 49% definitely or somewhat support the demand, 36% somewhat or definitely oppose it, with further 10% saying snap vote would not change anything/does not make sense.

Also read from this poll: