According to a new IRI poll, unveiled today, 61% of respondents say Georgia is heading in the wrong direction, while 31% say the country is moving in the right direction. The figures stood at 62% and 26% in June 2021.

A lengthy public opinion survey tracks Georgians’ opinions over the most pressing issues facing their households and the country, COVID-19 pandemic, 2021 municipal elections, political parties, and institutions, among others.

Below are some of the key takeaways regarding the respondents’ opinions on the country’s foreign policy course, relations with Russia, and Georgia’s response to Russia’s attack on Ukraine.

The poll was coordinated by Baltic Surveys/The Gallup Organization for the International Republican Institute (IRI) and the fieldwork was carried out by the Institute of Polling and Marketing during March 4-24 period through face-to-face interviews with 1,486 respondents and has a margin of error of plus/minus 2.5%. The survey was funded by the US Agency for International Development.

Of Friends and Foes

According to the poll, 54% named the European Union as the most important political partner for Georgia, followed by the U.S. – 53%, Ukraine – 45%, Turkey and Azerbaijan – 20% each, and Armenia – 7%. Russia and China were named by 4% each (respondents could provide multiple answers).

90% said Russia poses the greatest political threat for Georgia, followed by Turkey – 8% and the U.S. – 5%.

83% said Russia poses the biggest economic threat to the country.

On the other hand, the number of those who oppose further dialogue with Moscow has increased. 25% said strongly oppose it and 11% said they oppose it somewhat (compared to 11% and 9% in June 2021).

The number of those that positively see the Georgian Dream government’s handling of relations with Russia has increased, standing at the highest approval rate since April 2018. 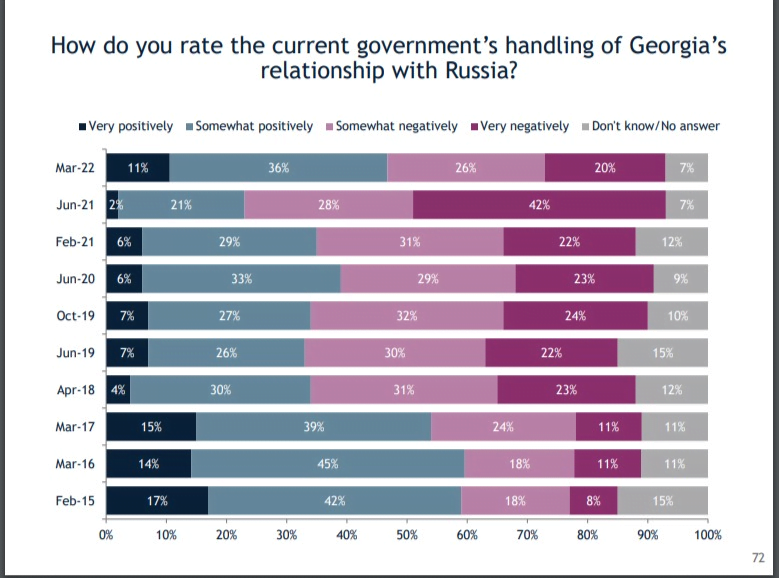 Further, per the poll, 42% of Georgians feel more insecure than secure living in Georgia, given the current state of Georgia’s relationship with Russia, while 24% feel very insecure. This is the highest level of insecurity since March 2016.

Also, 77% of Georgians say Russia’s aggression towards the country is still going on, 19% said it is over but likely to resume.

83% of those interviewed said they are aware of the Georgian government’s response to the Russian invasion of Ukraine.

Of these people, 28% consider the government’s response in support of Ukraine sufficient and 25% regard it as somewhat sufficient.

On the other hand, 18% and 26%, respectively, consider it somewhat insufficient and completely insufficient. 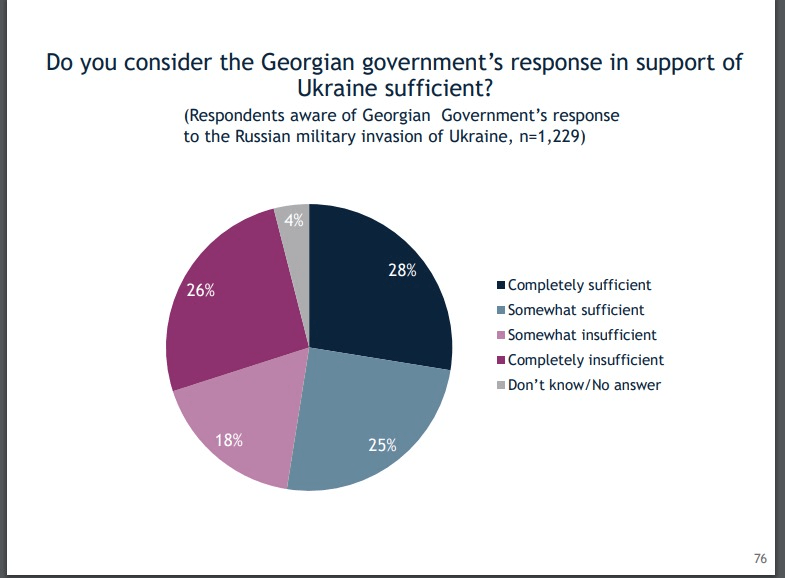 Asked about foreign policy, 44% of respondents said Georgia’s course shall be only pro-EU and the West. 38% said it should be pro-Western, but Georgia should keep up relations with Russia.

Further, 6% said Georgia’s course should be pro-Russian with relations kept up with the EU and the West. 1% wants only pro-Russian foreign policy.

74% of Georgians, as per the poll, fully support Georgia joining the EU, while 14% somewhat support the cause. 10% overall, either strongly or somewhat oppose Georgia’s integration into the EU. 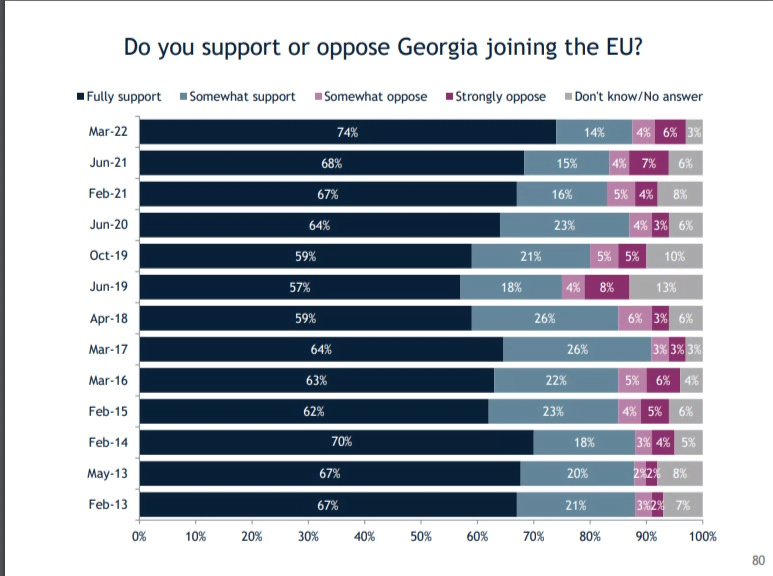 Regarding NATO, 60% fully support integration into the Alliance and 15% somewhat support the cause. 8% somewhat oppose Georgia joining NATO, while 12% strongly oppose this prospect.