The NATO Military Committee, led by Admiral Rob Bauer, has concluded its October 7-8 trip to Georgia after a joint plenary session with Georgian authorities in Tsinandali village of the eastern Kakheti region.

At the session, the parties discussed NATO-Georgia cooperation, ongoing reforms in the Georgian Armed Forces, and the current regional and Black Sea security environment.

In his opening remarks, Admiral Bauer reaffirmed NATO’s continued engagement with the country and stated that the alliance “stands ready to enhance [its] support to Georgia.”

“The permanent threat of Russia in the two breakaway regions, Russia’s continued provocations in the neighborhood, and the security situation in the Black Sea Region remain challenging for Georgia and the alliance,” Admiral Bauer said.

Defense Minister Juansher Burchuladze, for his part, assured the Committee of Georgia’s “unwavering commitment to our common security principles and objectives.” He emphasized that “the determination of Georgia to achieve the NATO membership has been strong as ever, and it is now safeguarded by the supreme law of the country – the constitution.”

In a bilateral meeting on October 7, Minister Burchuladze and Admiral Bauer also discussed the ongoing defense reforms and priorities for military cooperation with NATO.

The parties paid particular attention to the progress made in implementing the updated NATO-Georgia Package (SNGP) and highlighted the need for NATO’s more active involvement in enhancing the Black Sea security. They also discussed Georgia’s contribution to NATO-led international missions and the country’s progress in developing its transit potential.

Noting Georgia’s contributions to the alliance’s missions, the Chair of the NATO Military Committee said “the alliance has never appealed to Georgia in vain.” “NATO and Georgia share a unique partnership which has only become stronger over time,” stated Admiral Bauer. 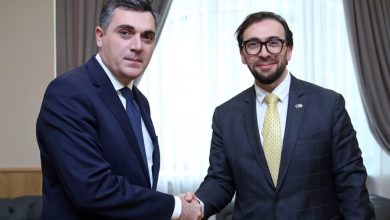