Georgia’s major opposition parties addressed European Union and NATO leaders with a joint letter, stressing that the Georgian Dream government’s “confrontational” refusal of the loan from the EU, conditioned on court reform and upholding Brussels-mediated April 19 deal, “constitutes the latest in cascade of events that aim to thwart Georgia’s Euro-Atlantic path.”

The parties said the GD government has consistently shown that their EU ambitions are merely a façade, under which Georgia underwent a “full-pledged state capture,” including of the judiciary, by the “informal” system of governance.

The signatories said July 5 homophobic pogroms, “when PM Garibashvili incited Russian and Georgian Dream-linked extremists to carry out mass violence against Tbilisi Pride, who later physically assaulted 53 journalists with one dying days later, was a landmark event in this context.”

“While it is our task to resist this danger to Georgia’s European and Euro-Atlantic path and reverse it, the moment to apply legitimate leverage and influence to halt these dangerous developments is now,” the opposition parties stressed in the missive sent to European Council President Charles Michel, Commission President Ursula von der Leyen, EP President David Sassoli and NATO Secretary General Jens Stoltenberg.

Noting that GD’s “blatant” violation of the April 19 deal and the subsequent rejection of the EUR 75 million conditional loan “elevates this dangerous trajectory to yet another level,” the parties recalled that the deal included the provision on holding snap parliamentary elections in 2022 if GD received less than 43% in October 2021 local elections.

Voicing confidence that Georgian voters “will deliver their political verdict in October,” the opposition parties expressed hope that EU and NATO partners “will support Georgian people’s democratic choice and demand to hold new elections as soon as possible.”

The parties pledged on their part to do everything to “protect” the citizens’ votes and “keep Georgia committed” to freedom, democracy, and rule of law. “We count on your strong political and moral support for ensuring free and fair elections the coming fall,” they addressed the EU and NATO officials. 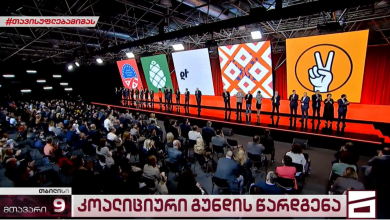