Vakhushti Menabde of the Georgian Young Lawyers’ Association (GYLA) said after the meeting that the parties discussed increasing the opposition’s representation in “important government appointments,” as well as making the electoral system more proportional by lowering the electoral threshold closer to the natural barrier.

The sides also talked about deeper reform of self-governance and the judiciary among possible solutions to the political polarization in Georgia. Menabde said that the parties did not touch upon the issue of the snap elections, which is the opposition’s key demand, repeatedly denied by the ruling Georgian Dream (GD) party.

Vakhushti Menabde noted, however, that the snap elections can only be
a short-term solution, while Georgia also needs a more far-reaching approach to prevent future polarization.

Gigauri also noted that reforming the judiciary and the Prosecutor’s Office, while increasing the opposition’s role in Parliament and the election of the Supreme Court judges, will be necessary to avert future crises.

Mr. Danielsson was mandated to mediate the talks between the ruling Georgian Dream and the opposition parties by European Council President Charles Michel, who led the effort to re-launch the stalled post-election talks on March 1, during a visit to Tbilisi. 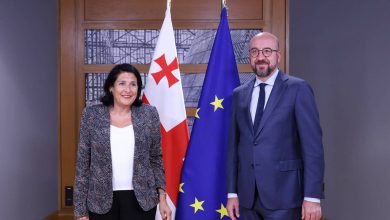