The Georgian Young Lawyers’ Association, a local civil society outfit, has welcomed bringing charges against three policemen in the case of alleged ill-treatment of Irakli Khoperia, while slamming the prosecution’s move to re-qualify the charges from torture to exceeding official powers, as well as delayed investigation.

The watchdog also said that signs of ill-treatment are also apparent in the actions of the fourth police officer, whose identity the prosecutors have yet to identify.

GYLA said that in February 2017 law enforcement officers misidentified and falsely detained Khoperia, brought him “without any explanation” to the police unit, where they tortured the man and threatened him with planting drugs, to obtain a confession for a crime he did not commit. According to CSO, police officers released Khoperia after finding out their mistake.

The watchdog noted that the Prosecutor’s Office began probing into the case in March 2017 on alleged torture, but dropped the investigation in October the same year due to the absence of crime. The investigation resumed in November 2017, upon the decision of the Tbilisi City Court.

On July 29, the Tbilisi City Court sent the three policemen to pretrial detention, a day after prosecutors brought charges against them.

In its statement of July 31, GYLA highlighted that despite many pieces of evidence for policemen’s wrongdoing, the prosecution took three years to bring charges against the law enforcement officers.

Besides, the CSO deemed it problematic that the prosecution re-qualified the case, which envisages less of a punishment for the charged law enforcement officers.

GYLA stated that re-qualifying charges in the Khoperia case once again underscores that cases involving ill-treatment by police officers are investigated with incorrect charges, GYLA noted.

The CSO noted that the prosecution should also bring charges against the other persons, including “policemen and other witnesses that gave false testimonies.”

GYLA filed a lawsuit on behalf of Khoperia in the European Court of Human Rights in April 2019. The case has been filed under the freedom from torture (Article 3 of ECHR) “because he had been subjected to ill-treatment by police officers and the ongoing investigation into the case had been ineffective.” 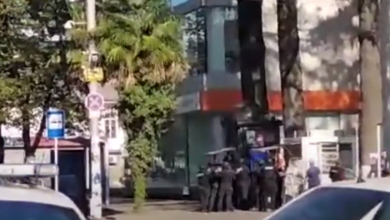