National Democratic Institute (NDI) has released its public opinion survey results, which shows respondents’ attitudes towards a broad range of issues, among them COVID-19 and disinformation and attitudes towards EU and NATO amid pandemic.

The survey was fielded by the Caucasus Resource Research Centers (CRRC) for NDI between June 26 and June 30 with the financial assistance of the UK Aid, and was carried out through nationwide mobile phone interviews (excluding occupied territories) with 1,550 respondents and has an average margin of error plus, minus 2%. In addition, 10 focus groups were conducted during June 24-30 in five cities, Tbilisi, Zugdidi, Batumi, ethnic-Azeri majority Marneuli, and ethnic-Armenian majority Akhalkalaki.

Sources of Information and Trust

According to the survey, Georgians “are concerned about the quality of information around the COVID-19 pandemic, but confident in their own ability to see through false narratives.”

81% of respondents named TV as the main source of information about the pandemic, followed by 41% opting for social networks and 26% for neighbors, friends, family members.

Regarding trusted sources of information on the virus, most Georgians trust the National Center for Disease Control (NCDC) – 90%, the Georgian Government – 85%, Journalists – 73%, local government – 66%, and religious leaders or the church – 61%.

“The preventive measures were introduced very quickly, the borders were closed down and as it turned out, we, Georgians were not as unorganized as we thought we were. All this led to good results,” the focus group participant, man, 28 from Tbilisi said.

Asked about the origin of COVID-19, 13% of the surveyed persons say it came about naturally; 30% think the virus was developed in a lab and spread intentionally, 22% believe it was made in a lab and spread accidentally, 3% says it does not really exist. 32% said they do not know.

“I have heard on TV that Russia has suspicion that Lugar lab is producing weapons against them. I really don’t think this is true, but if it was – I would be on board with it,” said one of the focus group participants, a 66-year-old man from Tbilisi.

Asked whether “natural remedies” (such as drinking hot water, vodka, eating garlic) can be used as a cure against the virus, 78% Georgians say no, as opposed to 19% saying yes.

Asked if they would vaccinate themselves and their kids if the COVID-19 vaccine existed, 38% said yes, 46% said no, 15% do not know. 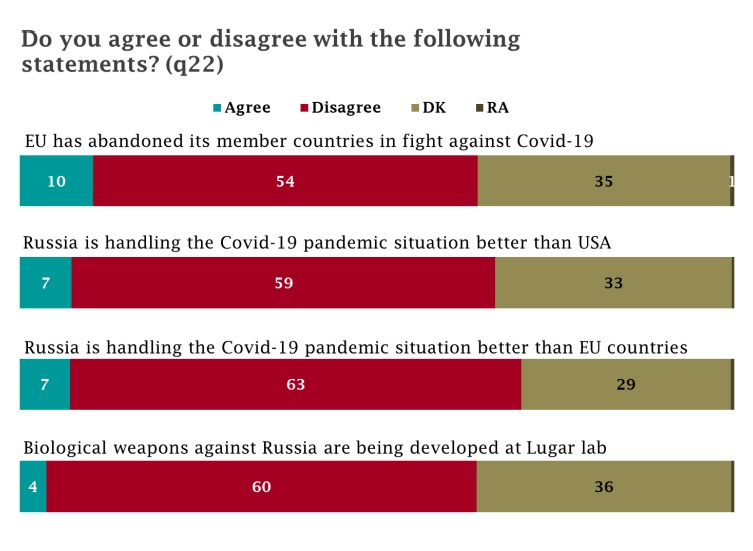 29% of the surveyed people believe that there is a certain foreign country that intentionally spreads disinformation about COVID-19 in Georgia, as opposed to 35% that says there is no such country. 36% said they do not know.

Of the 29% who believe a certain foreign country is spreading disinformation about the pandemic in Georgia, 36% do not know which country it is, 33% named Russia, 27% named Armenia, 11% named China.

According to the survey, only 10% of the Orthodox Christians reported that they attended Easter Liturgy in the church.

Responding to the statement “faith protects believers of my religion from getting infected with the COVID-19” 53% of the respondents agreed and 38% disagreed.

Tbilisites and people between 18-34 are more likely to disagree with the statement. 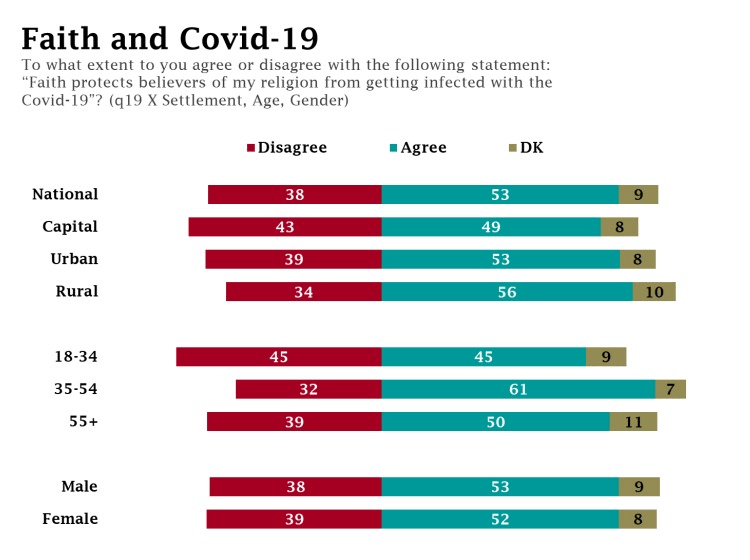 76% of Georgians approve the Georgian Government’s stated goal to join the European Union, down with 6% from November 2019. 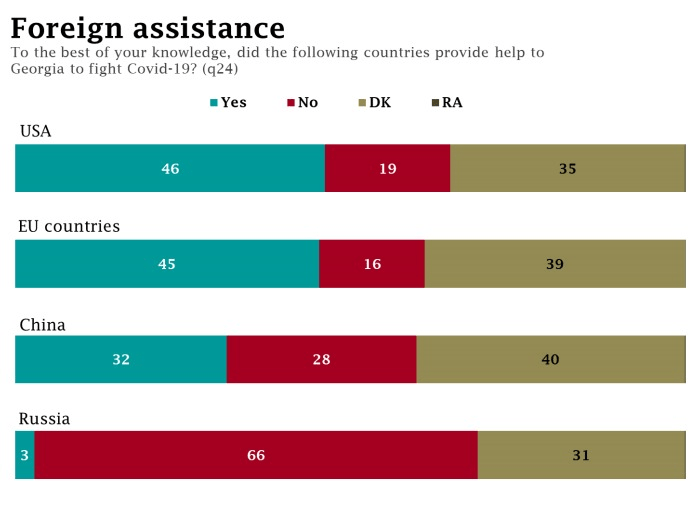 In addition, 59% of the respondents agree with the statement that “Georgia will benefit more from European and Euro-Atlantic integration.” 11% says “Georgia will benefit more from abandoning European and Euro-Atlantic integration in favor of better relations with Russia.” 12% agrees with neither statement, while 16% does not know.