Public opinion polls held in Georgia show the majority of Georgians support country’s integration into the West. Recent poll by National Democratic Institute (NDI) showed the number of respondents who support the government’s stated goal to join the European Union stands at 78%, while 71% approve Georgia’s NATO membership. Yet, experts warn that these views are fragile.  The Kremlin’s disinformation and propaganda, with its focus on identity politics, fuels anti-Western sentiments and is gaining ground in Georgia.

Laura Thornton, Georgia resident director in National Democratic Institute’s (NDI), that regularly solicits opinion polls in Georgia, told me that “while approval figures [for EU and NATO membership] are encouraging, it does not mean they are not fragile.” She added that “a lot of the people who approve EU and NATO membership, also hold views that are very problematic, like “I believe the EU threatens Georgian culture and traditions,” or “I believe NATO threatens the [Georgian] Orthodox Church.”

Other researchers had similar findings. “Antiliberal Populism and the Threat of Russian Influence in Georgia’s Regions” research by Liberal Academy of Tbilisi and Caucasus Research Resources Center (CRRC) noted that “liberal west fighting against Georgia’s Orthodox faith and traditions” is one of those important myths that Russia spreads in Georgia.

The research showed that, in Kakheti, country’s easternmost region, 46% think the U.S. threatens Georgian traditions, 42% thinks the same about the EU and 39% – about Russia.  In Shida Kartli, the region most affected by Russian invasion in 2008, 42% think US threatens Georgian traditions, the while that number stands at 33% for both EU and Russia.

In NDI survey of April 2019, 41% of those surveyed either fully or partially agreed the statement that the EU threatens Georgian values. 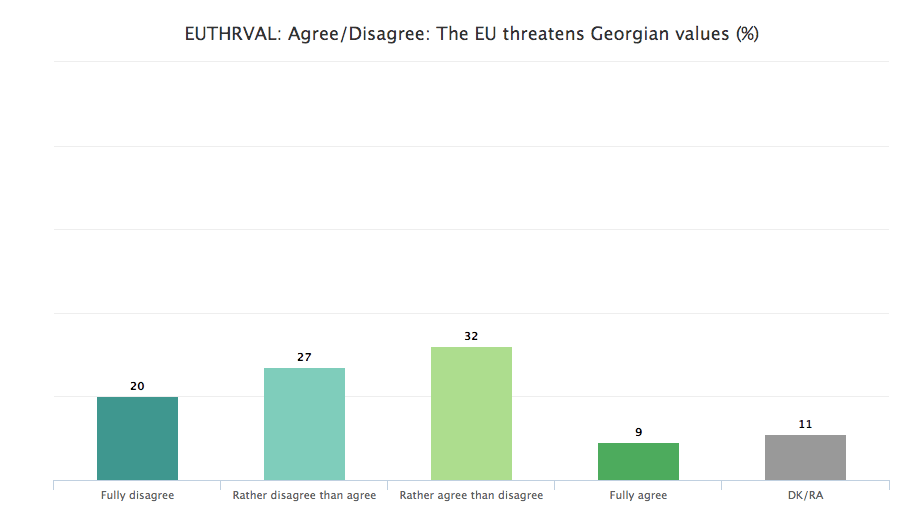 In the same poll, 19% of of those who who disapprove Georgian Government’s stated goal to join the EU mentioned EU weakening Georgian national identity as the reason of their belief. 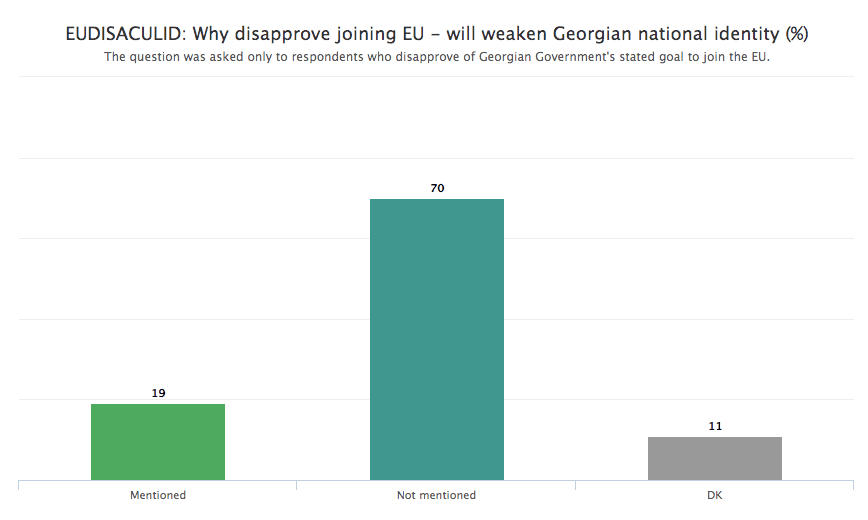 Propaganda messages painting Western values as incompatible with Georgian identity have doubled in MDF sample, growing from 253 messages in 2017 to 505 in 2018.

According to the report, while these identity issues were the most popular themes for Kremlin disinformation (24.3% of all messages), these were followed by rising concerns over immigrants (19.7%) and questioning European integration -10.5%.

MDF research tells us that often, the messages of disinformation mixed all of these narratives altogether. “It is planned to change the ethnic balance in Georgia!… A mass resettlement of aliens is underway! The aim of Angela Merkel’s visit has become clear – 200 000 migrants must be resettled to Georgia!” – Jondi Baghaturia of Kartuli Dasi party said.

Tamar Kintsurashvili of Media Development Foundation says Kremlin propaganda has different narratives for Georgia’s different provinces. Anti-Western propaganda, for example, would use one set of messages for the autonomous region of Adjara, bordering Turkey, and another for the provinces dominated by Azerbaijani and Armenian ethnic minorities, on the other.

Georgia-watchers have been aware for many years now, largely thanks to NDI/CRRC polls, that compared to ethnic Georgians, Georgia’s largest ethnic minority communities – Azerbaijanis and Armenians – tend to be less supportive of Georgia’s pro-Western foreign policy stance. 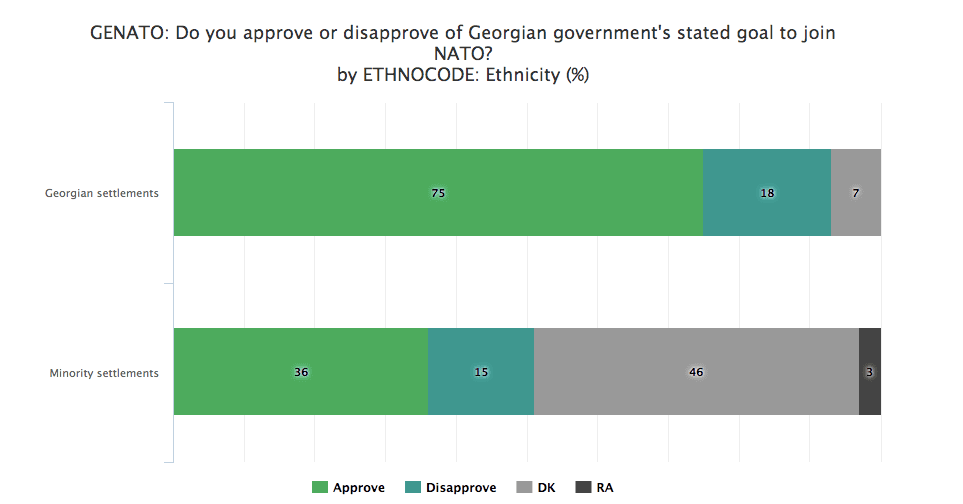 Glorifying Soviet past has been one of the favorite messages of Russian propaganda in Georgia. A sizable proportion of ethnic Georgians, 39% say “dissolution of Soviet Union has been a bad thing”. The number is even higher among ethnic minorities, with 58% assess it as a bad thing, while only 21% thinks it was “a good thing.” 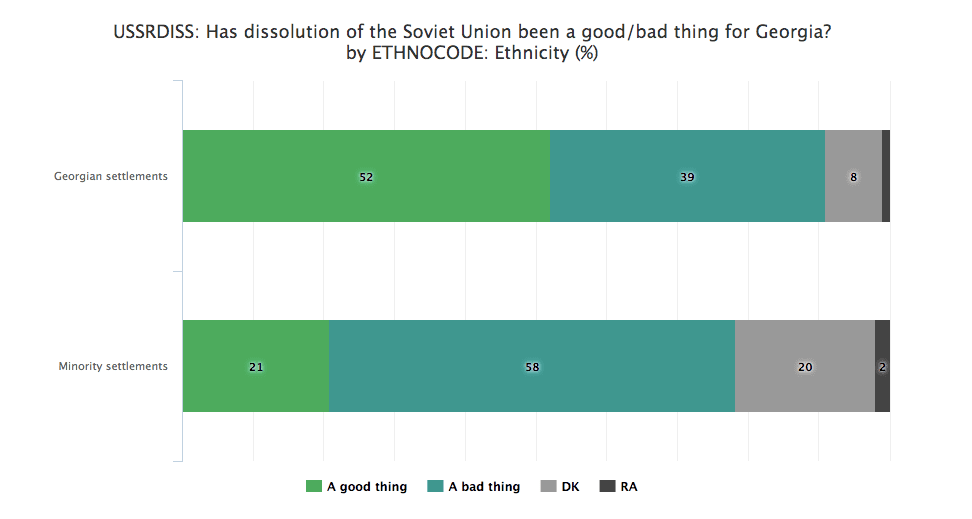 Some experts argue that the Russian disinformation comes from a very special secret service and that is has a very militarized mindset.  Peter Pomerantsev, researcher and journalist says “the point is not the ideas that are there, it is not something that you can debate or defeat and it does not even matter if they are lies. They think about it in a very instrumental way. It is designed to confuse, delay, distract and divide”.

NDI’s March 2018 poll asked respondents whether they believe Russian TV stations often spread disinformation. 44% of ethnic Georgians and 56% of citizens of ethnic minority settlements say they “do not know”. Only 8% of ethnic Georgians disagree with the statement, while this number is significantly higher – 23% – among the minorities. 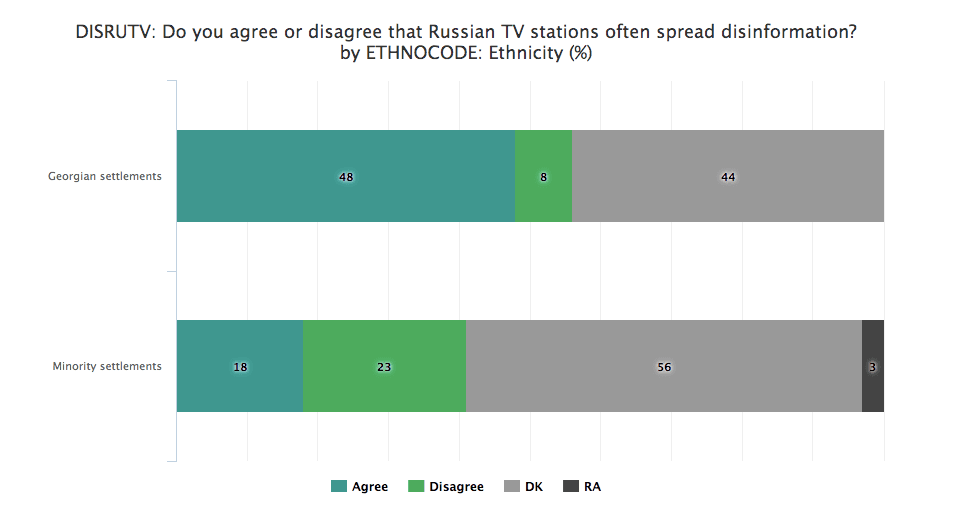 “We need to make sure that people change these other views and misconceptions to stay on this track of European and Euro-Atlantic integration. We also need to be more cognizant that there are forces that are working actively against this path”, NDI’s Laura Thornton told me. 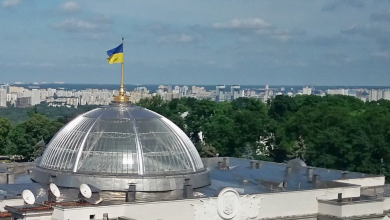