In a brief interview with ApsnyToday, a local media outlet, Bzhania vowed to reenter ‘electoral’ campaign after returning to Sokhumi in a few days time.

On March 2, Bzhania reportedly fell sick in Sochi, where he stopped off on his way from Moscow to Sokhumi. He was promptly hospitalized and eventually delivered to a hospital in Krasnodar, Russian regional capital some 300 kilometers north from Sochi.

This is the second time in less than a year that Bzhania faces serious health problems. Bzhania, a Soviet KGB school graduate, was Abkhaz leadership hopeful and the main rival of then incumbent leader, ex-KGB officer Raul Khajimba in 2019 leadership race as well, however he had to quit the contest after being poisoned with heavy metals.

Bzhania is regarded as the key candidate in repeat Abkhaz leadership race, that is slated for March 22. The region’s previous leader Raul Khajimba resigned amid January protests and the local court’s decision to declare September 2019 runoffs invalid.

He demanded Russian law enforcement authorities to hand over “all available information kept by the said outlets, as well as medical reports for preliminary verification.”

According to TASS, Moscow-backed Abkhaz authorities could not find evidence that Bzhania’s malady was caused by poisoning. “The disease was triggered by adverse effects of medication,” they stated.

Elections in Georgia’s Russian-occupied Abkhazia and Tskhinvali/South Ossetia regions are denounced as illegitimate by Tbilisi and the international community, except of Russia and four other countries (Nauru, Venezuela, Syria and Nicaragua), which have recognized the two regions’ independence from Georgia. 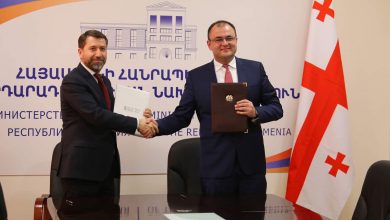