Both sides reported after the meeting that Abashidze and Karasin spoke on Georgian-Russian relations in the fields of economy, transport, tourism and culture, with the latter highlighting that Russia remains Georgia’s second largest trading partner.

In its press release, the Georgian PM’s press office said “although the Prague format does not cover issues related to Georgia’s occupied regions,” Abashidze still touched upon the “grave human rights and humanitarian situation in Abkhazia and Tskhinvali Region.”

According to the press office, Abashidze also voiced his concern that “there is no progress” in the Geneva International Discussions, the diplomatic venue for dealing with the consequences of the 2008 war.

The sides also talked on the implementation of the 2011 customs monitoring agreement, a Swiss-mediated agreement on Georgian-Russian cargo monitoring.

Georgian PM’s press office said “problems” identified in the process of implementation, “have to be addressed within the confines of the joint working group established as part of the agreement.”

The Russian Foreign Ministry, on its part, said Grigory Karasin confirmed Moscow’s readiness to proceed to its implementation “in strict accordance” with the agreement terms. Later however, in an interview with Kommersant newspaper Karasin said some “technical details” will need be clarified at the upcoming working group meeting.

“We have to install customs terminals, [we have to] understand how they will function. It’s not so simple; two of the three corridors run through Abkhazia and South Ossetia, which raises some political emotions from our partners concerning their status, but we need to fulfil the agreement and we will move forward,” he noted.

Asked if Moscow is pushing Tbilisi to conclude separate agreements with Sokhumi and Tskhinvali authorities, Karasin said “this is not true, we are not putting the question like that; [it’s that,] there are some details and they have to be discussed with these republics.”

The Russian Foreign Ministry kept up with its tradition of criticizing Georgia’s relations with NATO, with Grigory Karasin stressing that the country’s military cooperation with the Alliance, as well as its military exercises in Georgia “remains to be a serious challenge” for otherwise positive bilateral relations.

The Russian Deputy Minister also slammed Georgian leaders’ “openly unfriendly public remarks” against Moscow, saying they “contribute negatively to the development of mutually beneficial bilateral cooperation.” “We of course would like to see fewer of such statements and more reserved ones,” he noted.

Karasin clarified some of these points in his interview with Kommersant newspaper.

The Russian diplomat said Georgia’s NATO integration agenda is becoming more active. “Large-scale NATO exercises have become regular, and Georgia fosters participation of other countries in the region, such as Armenia,” he said.

“Tbilisi needs to decide; either they choose to establish an atmosphere of regional cooperation in the South Caucasus, or a Euro-Atlantic agenda… History shows that attempts to play two games at the same time leads to disarray and might bear negative consequences,” Karasin also said.

“It’s clear that if NATO’s military presence in the South Caucasus grows, sooner or later this will lead to complications,” he added. 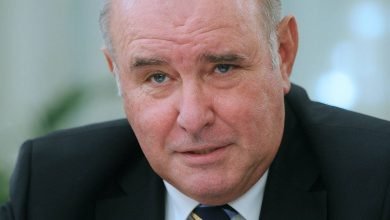