Several thousand protesters gathered in Tbilisi again to express their solidarity to the father of one of the teen murder victims – Zaza Saralidze, who has been protesting the authorities’ handling of the bloody incident last December, and has been calling for Prime Minister Giorgi Kvirikashvili’s resignation.

Addressing the demonstrators, Zaza Saralidze denied that the rally was politically-driven, referring to the allegations of some ruling party politicians that the demonstration yesterday was hijacked by opposition politicians. “The Government and the State Security Service should stop trying to politicize the tragedy … I will never be guided by politics,” Saralidze said.

He then noted that the authorities were trying to “deceive” him by reopening the probe, adding that he requested a meeting with Interior Minister Giorgi Gakharia two months ago, but the latter ignored his appeal. “The system that kills our children must be dismantled,” Saralidze also stressed.

Malkhaz Machalikashvili, the father of Temirlan Machalikashvili, who was shot during the State Security Service operation on December 26 last year and succumbed to his injuries two weeks later, joined the demonstration as well.

The solidarity rallies are underway in various cities across Georgia, including Akhaltsikhe, Borjomi, Gori, Kutaisi and Zugdidi. A parallel rally in Tbilisi, convened by high school and university students in front of the 51st school, where the two murder victims studied, to underscore their non-partisan character, joined the demonstration on Rustaveli avenue. 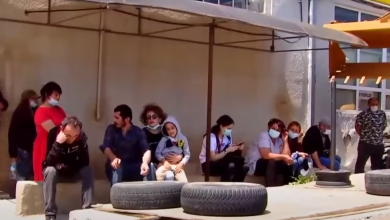