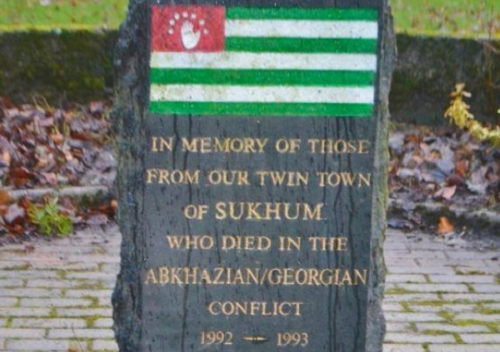 The East Ayrshire Council in Scotland issued a statement on November 29, saying it would “restore” the Abkhazia War memorial in the city of Kilmarnock “to its original location, without any changes being made at this time,” ending a nearly month-long controversy over the fate of the monument.

The Council also invited “all parties who are minded to assist” to engage “in a meaningful dialogue with the aim of establishing a universally acceptable alternative wording and content, which the Council will then be pleased to put in place.”

The memorial, located in the Howard Park in the city of Kilmarnock, was erected in 1990s to commemorate the lives of the combatants who participated in the 1992-1993 war against the Tbilisi authorities, according to both Russian and Sokhumi representatives.*

The monument includes a flag of the Abkhaz separatist forces during the conflict, while its inscription spells the name of the region’s main city Sokhumi in a Russified manner, reading: “In memory of those from our twin town of Sukhum** who died in the Abkhazian/Georgian conflict 1992-1993.”

Removal of the memorial a month later, stirred virulent controversy, with Moscow and the Russian-backed Sokhumi authorities slamming Tbilisi for its disregard of the historical memory and pressing for the monument to remain in its existing form.

According to the East Ayrshire Council, following the request of the Georgian Embassy and the subsequent consultations with the Foreign and Commonwealth Office through the Scottish Government, the Council hired “a professional stonemason” in order to “obtain confirmation whether any alterations which might be proposed were technically feasible.”

The Council, however, added that “whilst the request was made with the intention of having a stonemason inspect the memorial” on spot, the contractor, “unaware of the political context,” removed the memorial to a stonemason’s yard, “on a temporary basis, to allow the assessment to be carried out pending a decision being taken.”

The initial statement of Tamar Beruchashvili, however, differed from this account. Beruchashvili told the IPN news agency on November 9 that during her visit in October she had talked to the Scottish Government, who “promised to communicate with the local government in the city of Kilmarnock.” “They expressed support of the approach of the British Government in regards to Georgia’s territorial integrity and sovereignty, and the local council decided few days ago to remove the monument, which is a very good result,” she added.

On November 16, Georgian Deputy Foreign Minister David Dondua denied that the purpose of the Georgian diplomats was to permanently remove the memorial, saying they only “told the local authorities that this memorial contained politicized symbols and was inconsistent with Great Britain’s policy regarding the sovereignty and territorial integrity of Georgia.” Dondua also noted that “nobody has requested its removal or destruction,” and that the local authorities had removed the memorial only temporarily in response to this request, adding that it would be returned after corrections were made.

Later, the State Minister for Reconciliation Ketevan Tsikhelashvili said she believed the memorial had to be restored, adding that the Georgian Foreign Ministry had “such promise from the local authorities in Kilmarnock,” and that she was sure it was “possible to find a form that expresses the common pain and that is acceptable for all sides.” Tsikhelashvili also said she believed “engagement and cooperation of the Georgian and Abkhaz experts in this process” was possible.

The Russian-backed Sokhumi authorities protested against the memorial’s removal, with the region’s “foreign ministry” accusing the Georgian authorities of “an act of vandalism, directed at the destruction of the historical memory of the Abkhaz people,” and “aggressive and inhumane character of the Georgian policy towards Abkhazia and its people.”

Speaking to the Geneva International Discussions co-chairs on November 23, Sokhumi “foreign minister” Daur Kove rejected a compromise solution – amending or modifying the text of the memorial – by saying: “we shall never allow for the names of the defenders of the motherland to be put in the same row with those of the aggressors.”

The Russian Foreign Ministry expressed its discontent as well, with Deputy Foreign Minister Grigory Karasin calling on the Geneva talks co-chairs “to give an adequate assessment to the provocation regarding removal of the monument to the Abkhaz warriors in the Scottish city of Kilmarnock.”

“This action was organized under pressure from Tbilisi and extremely painfully received in Abkhazia, where the memory of the tragic events of 1992-1993 is revered. By scoring such “points” Georgia undermines the dialogue and leads the situation in the region into a dead end,” reads the statement of the Russian MFA.

* The Kilmarnock’s official statement stresses, however, that it was commemorating “not those who fell fighting for, or by the hand of, one side or the other, but simply all of those from Sukhumi whose lives were lost.”