In his speech, the GD whip lumped the Berdzenishvili brothers with the United National Movement, ex-President Mikheil Saakashvili and European Georgia chair, former UNM official, Giga Bokeria — all of whom the liberal politicians have opposed in the past — as “the Bolsheviks of the new age.”

The GD chair’s remarks come as Davit Berdzenishvili faced an alleged attack and harassment in downtown Tbilisi on June 6, supposedly over his brother’s highly controversial remarks about  Erekle II, the 18th-century king of East Georgian Kartli-Kakheti Kingdom, which drew anger from Georgia’s ultraconservative groups and the Orthodox Christian right, among others.

“They have selected several greatest Georgians and by diminishing their names, they try to destroy the identity of our country and the people,” MP Kobakhidze claimed. “Sometimes they take a dislike to Ilia Chavchavadze’s poetry, sometimes they find fault with specific political decisions of Erekle II, sometimes they disapprove of the way [King] David Aghmashenebeli brought up his kids and grandkids.”

Alluding to Levan Berdzenishvili’s remarks about King Erekle II, the GD chief claimed “this was not merely a depraved speech of a man imbued with hatred, without a god and a homeland. They are simply continuing the campaign the UNM began back when they came to power.”

“They know very well that to undermine national identity, you must tread on what is the most sacred, on what the identity stands on. First of all, these are the great ancestors of this nation and its faith, the [Orthodox] Church,” the governing party chair argued, going on to claim: “This is why the key targets of this attack, assault are our great ancestors, our faith and Church.”

“To make a person degenerate, firstly you must make them refuse their own mother and father,” MP Kobakhidze reasoned.

The ruling party chair claimed that people he called the “Bolsheviks of the new age” are “trying to destroy with propaganda what their ideological ancestors, the Bolsheviks, destroyed with sledgehammers a hundred years ago.”

“We will not allow this,” he vowed, going on to claim that the GD will make sure that “their success rate on the path of destroying the national identity is zero.”

With the speech, she suggested, MP Kobakhidze indirectly told future perpetrators of attacks against politicians that they will not face punishment.

MP Samnidze argued that the GD leader was, in reality, upset over Levan Davitashvili’s criticism of billionaire, ex-Prime Minister Bidzina Ivanishvili, founder of the ruling party and its “king, key patron, and the informal leader.”

“You are the ones who fight against the identity and future of this country, when instead of talking about actual problems, you try to further pit the public against each other over [non-issues] and pseudo patriotism,” she added.

Davit Berdzenishvili himself also argued that the governing party chair had “called for violence” in his speech.

The brothers Berdzenishvili have enjoyed lengthy political careers, since they established the Republican Party in the 1970s as Soviet dissidents. The older of the two, Levan, has even spent several years in jail as a political prisoner in the 1980s over his anti-Soviet views.

The Republican Party has previously been in ruling coalitions — only to split later on — with both the United National Movement and the Georgian Dream when the outfits came to power in the Parliament, in 2004 and 2012, respectively.

While Davit Berdzenishvili remains in the party, Levan Berdzenishvili has quit and retired from politics in 2021, continuing with his academic career.

Currently, the Republican Party has one lawmaker in the Parliament, Khatuna Samnidze, elected under the United National Movement-led Strength in Unity bloc in the 2020 parliamentary elections. But MP Samnidze has since distanced herself from the UNM and allied with the Strategy Aghmashenebeli party. 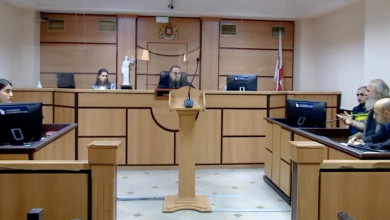 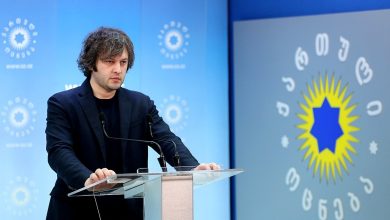