Addressing the Europe Day event held in Tbilisi’s Amirani Cinema Hall, organized by the EU delegation to Georgia, Salome Zurabishvili said “Europe is the only way to never ask again: ‘Peace or Freedom,’ as we all want both peace and freedom, therefore we want Europe.”

In her words, “the world history does not know of a similar organization that was able to strengthen and expand not by war, not by forceful expansion, but by the desire of free will of the subjects involved.”

The Georgian President stated that a distant perspective of the EU membership today becomes accessible if Georgia manages to not just answer the questions posed in the self-assessment questionnaire, but also fulfill them.

In her 7-minute speech, delivered in Georgian, President Zurbaishvili spoke extensively of Russia’s war in Ukraine and hailed Europe’s response and solidarity to the crisis.

“War in the middle of Europe threatens the EU itself, as Russia declared war not only on Ukraine but also on all the principles on which Europe stands,” she said.

According to the Georgian President, these are principles of the Helsinki Final Act, the norms of international law, respect for sovereignty and territorial integrity of states, justice and democracy, and firstly, the very European idea that relations should be based on peace and solidarity instead of war.

She commended the close cooperation of the 27 EU nations in responding to Russia with their solidarity with Ukraine, instead of compromising and avoidance of reality.

This solidarity, President Zurabishvili said, goes beyond the borders of the EU, and first of all, includes Ukraine, but also Moldova and Georgia, as well as the Western Balkans, the Georgian President underlined.

“This noble Europe is what 88% of our population supports unification with. This strong Europe that gains its strength not from war but from forceful development.”

The Georgian President said that with its “heroic defensive fight” Ukraine has renewed and accelerated Georgia’s European path.

“Ukraine and every Ukrainian sacrificing to defend their state is also sacrificing and fighting for our and all of Europe’s freedom, for its and for our European path,” she asserted.

“We should know how to appreciate the sacrifices made for us, gratitude and solidarity are also our obligations,” the President went on.

She said everyone understands that Georgia with occupied territories itself and at risk, cannot be compared with strong European states, added however that the expression of solidarity has different forms.

“We — Georgians — have shared values with Europe. These are the values that are fundamental and we will never divert from them,” said the Prime Minister, Irakli Garibashvili.

In his words, “the European choice of Georgia is our decision with no alternatives and it is not only a decision made by our government but a choice made by our – Georgian – people.”

The Prime Minister also spoke of the war in Ukraine and the Victory Day over Nazi Germany in WWII, which Georgia marks also on May 9.

“Fascism, which was a challenge not only for Europe but the entire world, was defeated with our unity,” PM Garibashvili went on, stressing the role of many thousands of Georgians in the victory.

“Unfortunately, 77 years after, an unequal and unfair war is waged in the heart of Europe – the largest European state – Ukraine today, which is a challenge not only for Ukraine but entire Europe,” he added.

The Prime Minister then reiterated solidarity towards Ukraine and the Ukrainian people, “wishing peace and quick recovery to our friendly nation.” 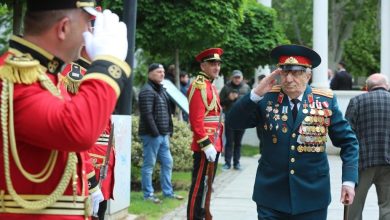