The United National Movement, the largest opposition party, has unveiled a reshuffle of its leadership, with party chair Nika Melia stepping down from his position as the interim chair of its political council.

In a briefing on January 10, Melia announced the party has tapped Koba Nakopia, a longtime member and MP, as the new chair of the political council. Meanwhile, Melia said he will also go on to lead the UNM’s Tbilisi branch ad interim.

As Nakopia takes on a new position, the post of the UNM’s executive secretary currently remains vacant. Meanwhile, the largest opposition group today reinstated the previously abolished position of the general secretary and tapped another longtime member, former MP Petre Tsiskarishvili for the post.

Melia noted that an “active process of renewal” will continue in both Tbilisi and regional branches of the party.

The opposition leader cited challenges facing the party and the country in general as a reason for the changes. He said it was necessary for the party to significantly alter its agenda and structure to improve its organizational system and better communicate with the public.

“I want all Georgian citizens to know what we are fighting for,” Melia stressed, going on to underline the need for the party to appeal to undecided voters and to attract new members.

Melia also highlighted the importance for the UNM to be more vocal about “the needs of ordinary citizens,” which according to him, have been neglected in recent times.

He argued that he had long intended to reform the party, but the efforts were stalled due to his detention almost a year ago and subsequent political developments. 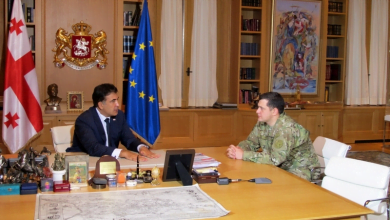