In an extended interview with Georgian Public Broadcaster late on November 23, Prime Minister Irakli Garibashvili discussed a wide variety of issues, including regional security, relations with Russia, the Government’s freshly-announced initiatives, and the recent political developments, going on to accuse some MEPs, U.S. Congressmen and the Public Defender of Georgia of being biased towards the opposition.

The Prime Minister claimed the United National Movement spent “millions from the state budget” during its 2003-2012 tenure to set up “clubs of friends” with some Members of the European Parliament, U.S. Congressmen, and think tanks. These “personal acquaintances and friends” of the UNM remain active today as well, the PM said, alluding to recent criticisms from European and U.S. lawmakers over the authorities’ treatment of jailed ex-President Mikheil Saakashvili.

At the same time, the PM went on, his government distinguishes messages by the UNM “clubs of friends,” and official statements from the allies, “which we listen to and read attentively.”

Asked to comment on recent remarks from Washington DC backing the Public Defender, Irakli Garibashvili argued the U.S. and European countries in general trust and listen to the Public Defender as an institution. “We are not talking about individuals here, there is a more objective attitude toward the institution.”

“Biased statements or actions of this or that ombudsman can be the subject of a separate discussion,” the Prime Minister went on, adding that incumbent Public Defender Nino Lomjaria fails to “portray the existing reality in a fair and balanced way.” He also claimed that the Georgian Dream lawmakers elected Lomjaria to the post in 2017 specifically because “she was not loyal to the government and was directly associated, affiliated with the opposition.”

Regional security and relations with Russia

The Georgian Prime Minister also discussed the changing balance of power in the Caucasus region after the 2020 Nagorno-Karabakh armed conflict, with Russia bolstering its positions. He said Moscow has also strengthened its positions in the Black Sea region.

He noted however that Georgia, which has access to the Black Sea region, remains a loyal partner of its Western allies – the EU, U.S., and NATO.

Speaking about relations with Russia, the PM said that after coming to power in 2012, the Georgian Dream government followed the recommendations of the European and U.S. allies to de-escalate relations with Russia. He said the Government took steps to minimize security risks and to restore trade, economic and cultural ties, and people-to-people relations.

But in terms of political relations, the Prime Minister said, the key problem remains that Russia “does not respect the sovereignty and the unity of our country, and continues to occupy the territories of our country.”

Noting that currently Tbilisi and Moscow are only having an informal direct dialogue on trade, economy and culture via Abashidze-Karasin format, PM Garibashvili said any “direct contact” on political matters with Moscow should require “sound judgment, good preparation and should be result-oriented, not just a meeting for the sake of meeting.” Georgian people should be informed in advance about the potential outcomes of such a meeting, he said.

The Prime Minister also noted that the de-occupation of Abkhazia and Tskhinvali Region/South Ossetia “cannot happen by itself,” and should come as “a result of a decision by the Russian leadership,” adding it also requires multilateral complex work, involving Georgia’s partners.

PM Garibashvili said his cabinet seeks to introduce a new bill on drugstore prices in the Parliament in December, hoping to regulate the pharmacy market latest by January. Albeit falling short of elaborating concrete measures of the proposed bill, the PM argued it would follow the suit of EU states to combat “unchecked medicine prices.”

Irakli Garibashvili said there is no competition in the pharmacy market, adding that there are companies that at the same time produce medicine, distribute it, own pharmacies, hospitals, and insurance firms.

The Georgian PM also discussed the proposed plans to toughen regulations on online casinos, noting the initiative does not contradict his earlier pledge to creating a free economic zone, including a gambling city in Gonio, a coastal town near Batumi city.

While slamming online casinos, where, in his words, local younger and socially vulnerable citizens waste their money, the PM defended land casinos, arguing they are mostly visited by foreign nationals and tourists. 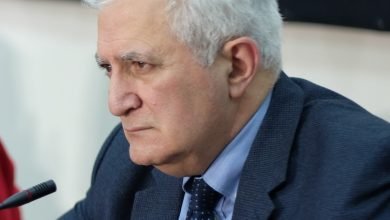