The coalition said the incident “contains signs” of unlawful interference with the professional duties of cameraman Levan Ablotia and reporter Beka Korshia – “a circumstance that must be considered during the investigation.” The CSOs noted that the probe was launched only under Article 124 of the Criminal Code, involving grave or less grave bodily injury through negligence.

It also urged the ruling party “not to encourage violence against journalists and call on its supporters to stop attacking journalists.”

The scuffle erupted yesterday at the GD office after the Mtavari Arkhi crew arrived seeking comments from Kareli mayoral candidate of the ruling party Zaza Guliashvili.

Footage aired by Mtavari Arkhi TV late on September 15 showed a confrontation between the channel’s crew and the people at the GD office, which continued on the balcony but did not show the fall. According to initial Mtavari Arkhi TV reports, Ablotia was “thrown” two stories from the office balcony.

Ablotia was discharged from the hospital today. Recalling the fall, he said that four or five people were trying to take away his camera on the office terrace. “I started moving backward to distance from the aggressors. … Turned out there was a railing behind me and amid the brawl, I lost balance and fell over,” he recounted, adding: “they threw me off [the balcony] in the full sense of the word.” 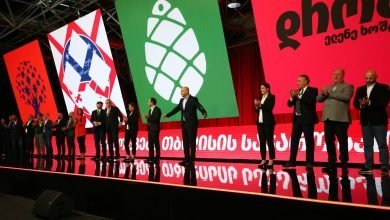