A total of sixteen candidates are competing in the Tbilisi mayoral race of the October 2 local elections, the highest amount of mayoral hopefuls the capital city has seen in over at least a decade. Below is the complete list of candidates in order of the ballot number assigned by the Central Election Commission:

1. Tamar Kekenadze – Third Force – Kekenadze, 39, is the chairperson of Free Democrats, which teamed up in August with Strategy Aghmashenebeli and other smaller groups to form the new platform Third Force. She had served as a Secretary-General of Free Democrats before an internal crisis split the group – once led by ex-Defense Minister Irakli Alasania – in 2020, and she took up the current position. Previously, she had worked at the Georgian Defense Ministry and Georgia’s Mission to NATO.

5. Nika Melia – United National Movement (backed by European Georgia, Girchi – More Freedom, Droa parties) – Melia, 41, has served as the chair of the UNM, the largest opposition party, since 2020. Melia fought in the Tbilisi mayoral race also in 2014, losing to Georgian Dream’s Davit Narmania in the runoffs. In the recent IRI poll, he came as the 5th most liked public figure with 39% of those surveyed viewing him favorably. Melia’s detention in February 2021 exacerbated Georgia’s months-long post-elections crisis, that led to EU-mediation and April 19 deal, and his release after EU-posted bail.

8. Giorgi Lomia – Alliance of Patriots – educated in international law, 46-year-old Lomia is a former MP (2016-2020). He was set to enter the legislature once again in 2020, but refused his mandate after the Kremlin-friendly AoP joined the opposition boycott over the “rigged” 2020 general vote, but nevertheless allowed businessmen on the party list to enter the Parliament.

9. Ana Bibilashvili – Lelo – Bibilashvili, 35, is one of the co-founders of the Lelo party but has remained out of the political limelight before her mayoral bid. An experienced architect and urbanist, Bibilashvili is also an invited lecturer at the Georgian Technical University, her alma mater. Earlier, Bibilashvili has been vocal about what she described as “ecological catastrophe” in Dighomi Meadows, once protected biodiverse meadowland in northern Tbilisi.

10. Mikheil Kumsishvili – Labor Party – Educated in business administration and public policy, Kumsishvili, 28, led the youth organization of the Labor Party, before his mayoral bid. He was also one of the founders of the youth political movement Gabede (Dare), a noisy group of young political activists.

15. Teimuraz Bobokhidze – Mamuli (Fatherland) – 53-year-old Bobokhidze is a lesser known candidate, who served between 1999 and 2004 as an elected member of the Tbilisi City Assembly. He is a leader of Mamuli (Fatherland), a small virtually unknown party that describes itself as a “society for the revival of Christian education, liberty and justice.”

23. Arnize Richard Ogbunuju – Our United Georgia –  Nigerian-born candidate, perhaps the first ever black person to fight for Tbilisi mayorship, has lived and done business in Georgia since the 1990s. Ogbunuju, who lives in Tbilisi with his Georgia-native wife and children, says he is the king of the Nigerian Igbo tribe. His Georgian may be a little bit broken – but his son, who is backing his father’s campaign, including on TikTok, has been hinting that the Georgian President, French-born Salome Zurabishvili is making mistakes, too.

25. Giorgi Gakharia – For Georgia – Former Georgian Dream Prime Minister, who quit the party in February over the detention of United National Movement chair Nika Melia, and went on to establish For Georgia later. Gakharia, 46, was the third most liked Georgian personality in the latest IRI poll with 56%, falling behind revered Patriarch Ilia II and incumbent Mayor Kakha Kaladze only. Earlier he served as a highly polarizing Interior Minister, including during June 20, 2019, anti-occupation unrests dispersal, and as Economy Minister in 2016-2017. Before, he worked as an Advisor to PM in 2014-2016 and as Business Ombudsperson in 2013-2016. Prior to that, Gakharia had a career in Moscow, Russia in the private sector.

37. Zaza Khatiashvili – Free Georgia – Experienced lawyer, Khatiashvili, 54, was the chair of the Georgian Bar Association in 2009-2017.

41. Kakha Kaladze – Georgian Dream – Incumbent Mayor, 43, secured his position in the 2017 elections with 51.3% of the votes, in the first round. Kaladze was appointed as the Energy Minister in 2012, shortly after the GD secured a parliamentary majority in the 2012 general vote. He joined the then-opposition GD party in 2011 and led their proportional list in the 2012 elections. According to the latest IRI poll, he is the second most favorably-viewed public figure in Georgia with 58%, next to only Orthodox Patriarch Ilia II. Before his career in politics, Kaladze was a footballer, winning UEFA Champions League with AC Milan twice.

48. Anna Dolidze – For People – Doctor of Juridical Science from Cornell Law School, Anna Dolidze, 41, inaugurated her For People party in May. Previously Dolidze ran as an independent for Tbilisi’s Didube-Chughureti majoritarian district in 2020 parliamentary elections, coming third with 17.95%. Dolidze previously served as an outspoken member of the High Council of Justice, an oversight body of Georgia’s judiciary, and held the position of Deputy Minister of Defense in 2015-2016. She also chaired the Tbilisi-based legal advocacy group Georgian Young Lawyers’ Association (GYLA) in 2004-2006. 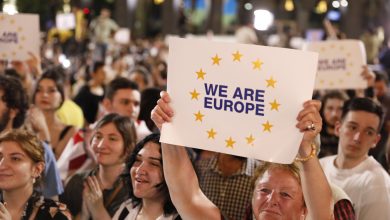