Gakharia hosted on May 31 a media roundtable with journalists from key television channels Georgian Public Broadcaster, Mtavari Arkhi, Rustavi 2, Formula, TV Pirveli, Palitra, Kavkasia, and Euronews. Gakharia pointed out that representatives from Imedi TV and PosTV were not in attendance, despite being “asked” to be at the event.

Gakharia had come under criticism for naming corruption as one of the key challenges for the country at his new party’s congress, with journalists recalling that he had previously dismissed allegations of corrupt dealings with companies that were allowed to operate during the country’s initial COVID-19 lockdown in 2020.

Responding to the criticism, he clarified that instead of “specific cases” of corruption, Georgia faces systemic corruption risks, stemming from “weak” state institutions.

Continuing on the risks, he said notorious businessmen, former Chief Prosecutor Otar Partskhaladze, Shevardnadze-era Economy Minister Vano Chkhartishvili, and Georgian Dream Founder Bidzina Ivanishvili’s cousin Ucha Mamatsashvili could have “exerted certain influence” on state institutions. Gakharia asserted that he had prevented such attempts “by some of them” during his premiership.

To remedy the corruption risks, Gakharia said he had initiated the transfer of the Anti-Corruption Council from the Justice Ministry to the Prime Minister’s Administration. The move was approved soon after his resignation in February.

Gakharia highlighted that mechanisms for probing instances of corruption should also be improved, through establishing a unified investigative system, as opposed to the investigative powers being currently divided up between several law enforcement agencies.

The fresh entrant to opposition politics largely maintained his position that “no illegal orders” were given during the police dispersal of the June 20-21, 2019, anti-occupation protest outside the Georgian Parliament building, which took place during his tenure as the Interior Minister.

He said that only the individual police officers were at fault for abuse of power in incidents where protesters and journalists sustained injuries, among others with rubber bullets. “Everything else, that happened as per a relevant order, is my responsibility,” Gakharia stressed.

He said he would order a police dispersal in the future as well, if necessary to “defend a state institution.” According to Gakharia, “violent groups” were attempting during the night of June 20-21 to break into the legislative building, something that could have led to grave results without a police response.

Recalling his resignation as the Prime Minister on February 18 over the impending detention of United National Movement leader Nika Melia, Gakharia cited again disagreement with the ruling Georgian Dream party as the reason. He noted that the party officials “interfered” in his decision-making as the head of the executive branch.

Gakharia said that those of his cabinet ministers who were in support of the raid were being influenced by the GD party leadership, alluding to Interior Minister Vakhtang Gomelauri. “Storming an opposition party’s office was categorically unacceptable for me,” Gakharia asserted, arguing the planned police operation posed serious risks for both the state and the ruling party.

Gakharia said that instead of resigning himself, he could have dismissed the Interior Minister, but that “would have damaged the country even more.”

The only thing the Georgian Dream achieved by the subsequent raid on the UNM’s headquarters was that Melia will no longer be prosecuted in the June 20-21, 2019, unrests case, Gakharia said, referring to the amnesty clause envisaged in the April 19 EU-brokered deal.

Gakharia did not deny Georgian Dream founder billionaire Bidzina Ivanishvili’s alleged sway over the Government. He said that “nothing much was done” for strengthening state institutions, which could have “replaced” the said influences.

“Informal governance is, unfortunately, part of our country’s political culture,” Gakharia noted, adding that besides the governing party, the opposition is also affected by the issue, recalling UNM Chair Nika Melia’s trip to Ukraine to consult with the party’s leader-in-exile former President Mikheil Saakashvili over entering the Parliament, among others. 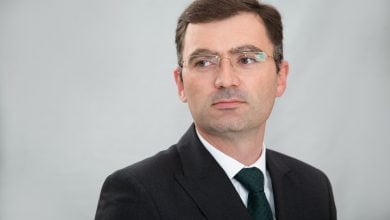