A new public opinion poll, commissioned by the International Republican Institute and released on April 5, reveals that the Georgian public is split on the issue of snap elections, disapproving the opposition’s decision to boycott the new Parliament and concerned with the economy.

Reckoning the country’s direction, 59% of the respondents said Georgia is going in the wrong direction (up from 53% in June 2020), while 30% said it goes in the right direction (down from 38% in June). 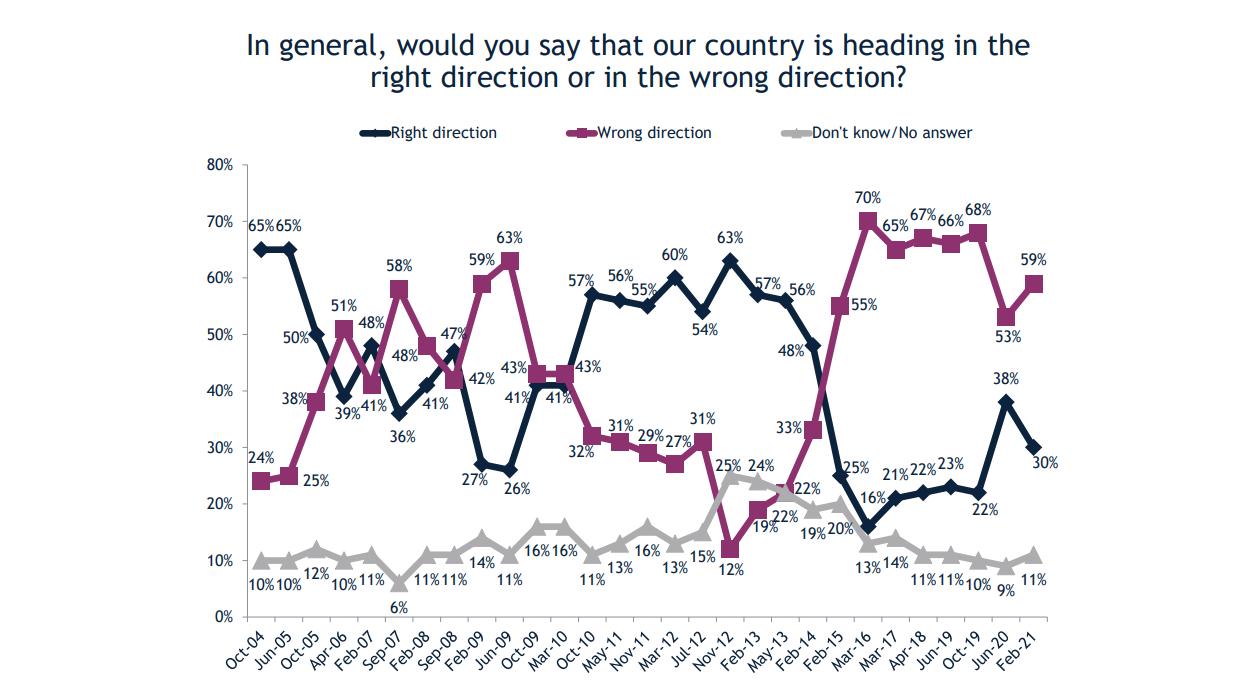 The poll was coordinated by Baltic Surveys/The Gallup Organization for the International Republican Institute (IRI) and the fieldwork was carried out by the Institute of Polling and Marketing during February 2-26 period through face-to-face interviews with 1,500 respondents and has a margin of error of plus/minus 2.5%. The survey was funded by the US Agency for International Development.

The Georgian public is split 45% on 45% on the issue of holding snap parliamentary elections. Only 25% of the respondents support the opposition’s demand for snap elections “definitely,” while 20% support it “somewhat.” 12% answered “somewhat no,” while 33% said “definitely no.” 9% of respondents did not know.

In regards to the opposition’s decision to boycott the new Parliament, only 26% support the decision, while 60% do not. 14% said they did not know the answer. 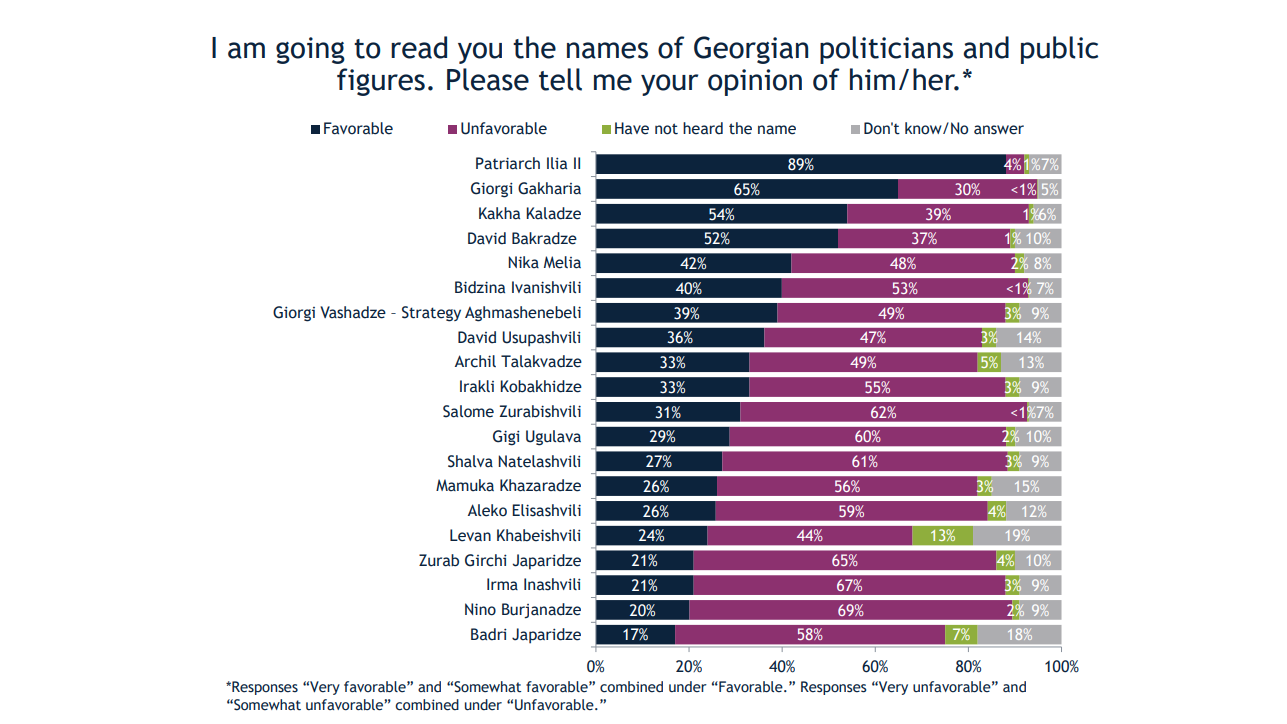 Army and the Church top the list as most favorably viewed institutions with 82% and 79%. Georgian Media, Police and Prime Minister’s Office follow the suit with 64%, 54% and 52% respectively.

The House of Justice and the Ministry of Health were the only two institutions the majority of Georgians assessed as open and transparent, with 53% and 52% respectively. Meanwhile, Prosecutor’s Office and the Court system ranked last, with 62% of respondents saying their performance was neither.

The majority of Georgians, 51%, said civil society organizations have an impact on government policy, up from 43% in June 2020.

Asked about the most important problem facing Georgia today, 49% and 16% of the interviewees answered unemployment and cost of living, respectively, while 8% said poverty as their first mentions (the respondents could make two mentions). 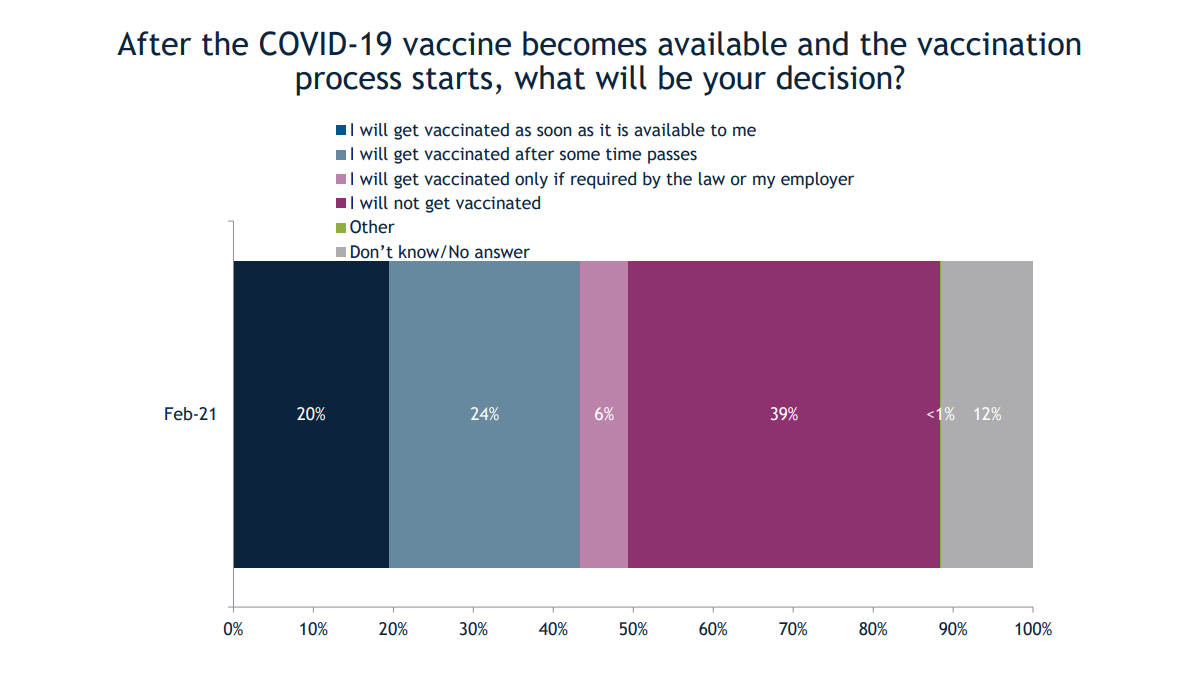 Allowed multiple responses, 87% of the interviewees said Georgia has a good relationship with the U.S., 85% said the same of the EU, closely followed by Ukraine with 84%. Regarding important political partners of the country, 69% named the U.S., 54% the EU, while 23% said Ukraine.

88% of Georgians consider Russia to pose the greatest political threat to the country, while 78% said it poses the greatest economic threat. 36% fully and 35% somewhat support further dialogue with the country. The majority of the interviewees, 53%, rate the GD government’s handling of relations with Russia negatively.

Full support for joining NATO and the EU was up 3 points each from June 2020 to 59% and 67% respectively. However, also considering the respondents who “somewhat support” joining, support for NATO membership remained at 78%, while for the EU it dipped from 87% to 83%. 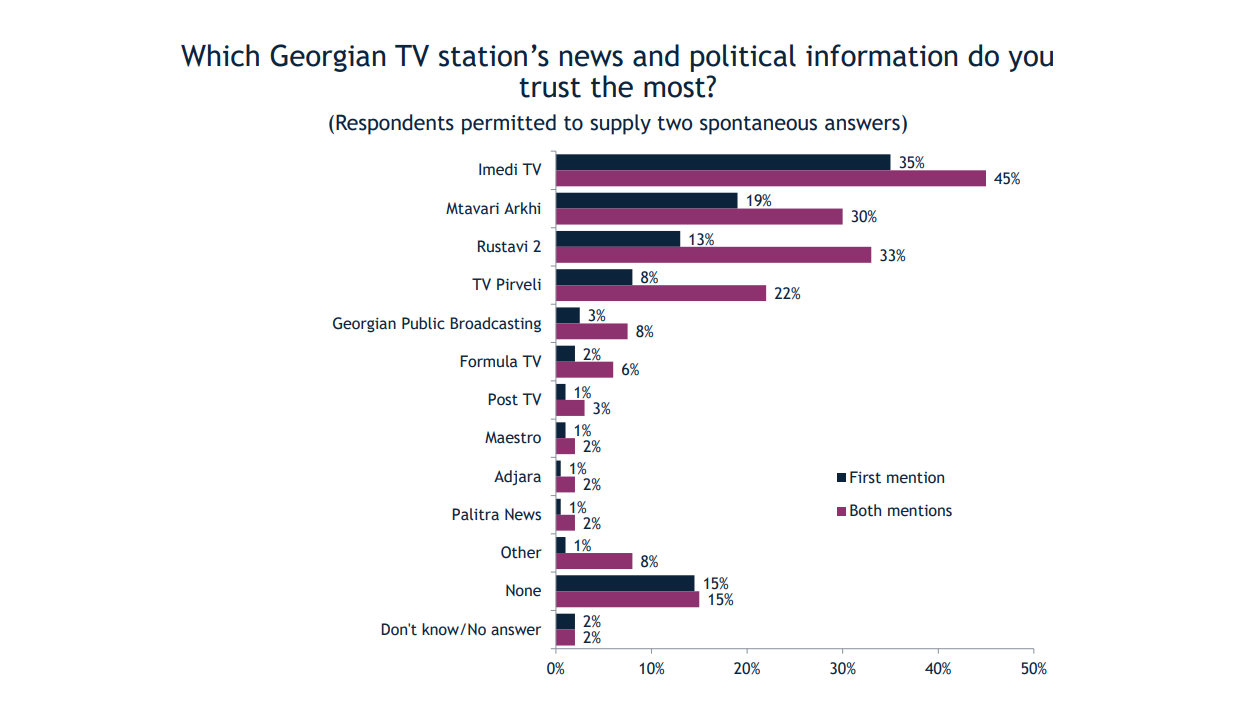 26% said Georgian media is totally free and 46% said it is somewhat free. Of the 21% who argued media is not very free or not free at all, 48% cited government pressure as the key reason.