A new public opinion poll published by the International Republican Institute reveals that Georgians are overwhelmingly satisfied with the government’s overall response to COVID-19 (41% very satisfied, 38% somewhat satisfied, 13% somewhat unsatisfied, 7% very unsatisfied), but remain concerned with the state of the economy in the country, especially in light of coronavirus.

The poll, released on August 12, was coordinated by Baltic Surveys/The Gallup Organization for the International Republican Institute (IRI) and the fieldwork was carried out by Institute of Polling and Marketing in a period between June 4 and July 2 through face-to-face interviews with 1,500 respondents and has a margin of error of plus/minus 2.5%. The survey was funded by the US Agency for International Development.

Pandemic and its Economic Impact

Assessing the change of economic situation of their households since the pandemic outbreak, a quarter of respondents say it “worsened a lot,” 42% say it “worsened somewhat,” it stayed the same for 29%, while it improved for a mere 3%.

Speaking of the economic situation in the country since the COVID outbreak, 40% say it worsened a lot, 42% perceive it worsened somewhat, while 15% state it remained the same. 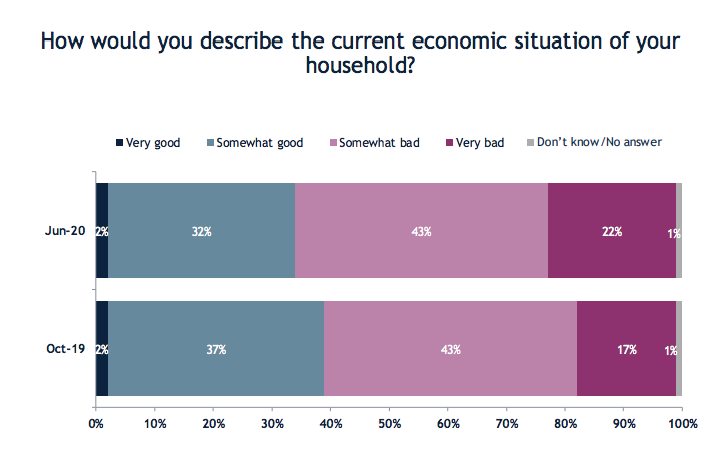 22% say their households’ economic situation currently is very bad, 43% see it as somewhat bad, 32% say it is somewhat good, while 2% regard it as very good.

Evaluating the effectiveness of institutions amid pandemic, National Center for Disease Control (NCDC) tops the rank with 64% assessing it as very effective, while 30% say it worked somewhat effective. Health Ministry comes the second with 55% (very effective) and 36% (somewhat effective), Prime Minister Giorgi Gakharia’s Office ranks third with 46% and 35%.

37% fully back Georgian Orthodox Church’s decision to hold rituals during the pandemic, 32% somewhat approve it, 14% and 8% say they somewhat or fully disapprove it, respectively; 9% don’t know/refuse to answer.

Nearly half of respondents – 47% – said the United States has been most helpful to Georgia amid COVID pandemic, with China coming the second with 6% and the European Union scoring third with 4%.

Economic issues remain the major concern for the majority of Georgians, with unemployment being the main problem for 46%, followed by the cost of living/high prices for 17%, poverty – 10%, economy in a general sense – 6% and COVID pandemic – 4%. Occupied territories was named by 3%.

9% of respondents say economic development is the biggest challenge for Georgia’s democratic development, followed by unemployment – 6%, return of lost territories – 5%, problems in education – 5%, freedom of speech -5%. 41% – don’t know/refuse to answer.

The poll also refers to the popular attitudes towards local government bodies. 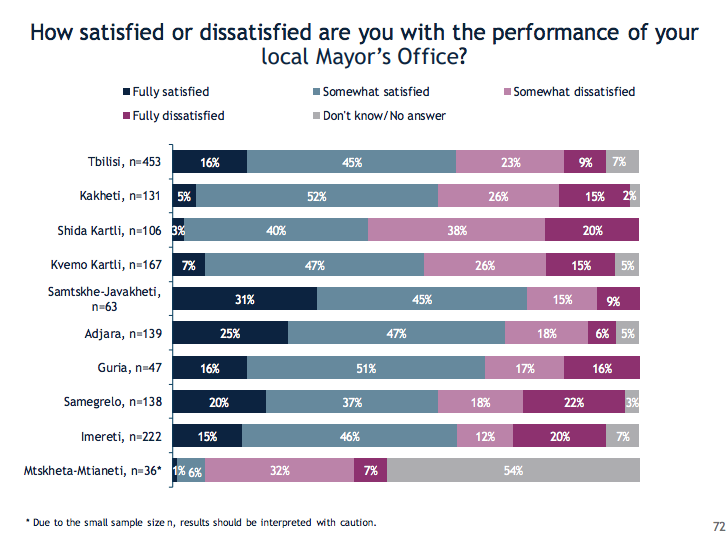 In the capital city of Tbilisi, 29% name environment/pollution as the main problem Tbilisi Mayor Kakha Kaladze needs to address. 17% of Tbilisites identify illegal constructions as the second most pressing issue, followed by poor infrastructure, and public transport named by 15% each; traffic jams – 14% and unemployment – 9%.

Media and Sources of Information

85% of respondents use Georgian TV to receive the news about international affairs, 33% use social media, 10% use Georgian news sites, Russian TV stations, and Georgian print media were named by 4% each (respondents could give multiple responses).

As for internet usage, 62% access the internet every day, while 25% never do.