Chiora Taktakishvili, member of the political council of the United National Movement (UNM), Georgia’s ruling party in 2004-2012, announced her decision to leave the party on her Facebook page on February 7, citing shortfalls in party democracy.

“In the first place, it troubles me not to see many like-minded members left in the [UNM] political council,” said Taktakishvili, who set twice as UNM MP. She stressed that “it is terribly painful that compromising on ideals and values become a norm [in the UNM], which is reflected in its staffing as well.”

“It is depressing to see that when the most important party figure [apparently referring to Mikheil Saakashvili – eds.] makes xenophobic statements, no party leader states [opposing] position,” Taktakishvili stated.

“It is unacceptable that instead of speaking up for murdered, beaten or harassed representatives of sexual minorities, my colleagues prefer to pledge loyalty to the [Georgian Orthodox Church] Patriarchate, even if it was the Patriarchate that kept spreading Russian, anti-Western propaganda for years,” Taktakishvili wrote.

She also stressed being “worried that for the last thirty years, I see the very same persons in Georgian politics, that are imposing their own rules of the game,” adding that these rules enable politicians to switch opinions or the political parties “for the sake of keeping their MP seat” and other privileges.

She then slammed the leaders of political parties for “trying to maintain a status quo” by hindering ascent of the new figures’ in politics “because they see them as competitors.”

Taktakishvili also wrote that she made efforts to make the UNM more transparent and to encourage fair, competition within the party, “however, it turned out that [these efforts] were not sufficient.”

“If the largest opposition parties refuse to have intra-party democracy, meritocracy and, most importantly, accountability towards their voters… how can we get a healthier political space?” – she asked.

Taktakishvili then said that “because of [these reasons], disagreement arose between the United National Movement and the European Georgia party three years ago that could have served as a big turning point,” adding however, that in the end “there were no changes made to improve the management in either of the parties ever since.” Party conventions, promises [made], pro forma elections, [fake party primaries/elections].”

On February 6, UNM’s three political council members – Zaza Bibilashvili Mariam Gersamia and Nino Kalandadze – announced that they are “formally ending”their membership in the party after two years of full disengagement from it. Like Taktakishvili, the three also stressed they do not intend joining any other political party. 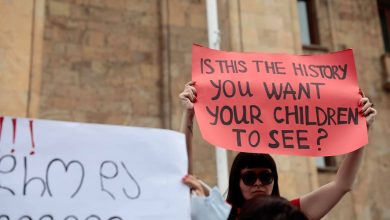