The Coalition for Media Advocacy, a platform of ten Georgian rights watchdogs, called on Kibar Khalvashi, the new owner of Rustavi 2 TV, one of Georgia’s most-watched television broadcasters, to fulfil his promise and guarantee the channel’s editorial independence.

In a joint statement of July 23, the Coalition called on Khalvashi to “take responsibility for solving the financial problems of the broadcaster so that the editorial policy of the channel is not damaged.”

The watchdogs consider that independent media are “an important factor for the country’s democratic development,” and that journalists should be acting according to their “conscience and professional standards,” therefore, should be free from any interference from director or owner into their professional activities.

It calls on international organizations and diplomatic corps “to pay particular attention” to the developments around the channel as well.

The Coalition’s statement comes a day after Kibar Khalvashi announced that a highly-experienced European or American media manager “might be selected and appointed” to help Rustavi 2 TV produce “critical TV product of high quality, [and] journalistic standards.”

Journalists of Rustavi 2 TV considered Khalvashi’s announcement as “an attempt to interfere in the editorial policy,” as they were previously rejected to create a civic council comprised of CSO representatives aimed “to protect editorial independence.”

In its judgement of July 18, the seven-member Chamber of the ECHR declared there has been no breach in fair trial guarantees in Rustavi 2 ownership dispute. 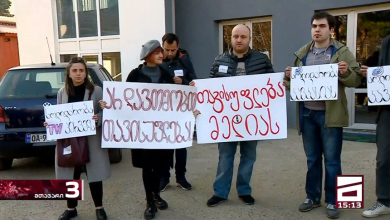