Russia’s Foreign Minister Sergey Lavrov said on July 17 that Moscow is expecting that Tbilisi will soon realize “the harm and danger” of “anti-Russian hysteria.”

Lavrov spoke with the Russian Arguments and Facts about the developments in Tbilisi which were triggered by the Russian delegation’s presence at a session of the Inter-parliamentary Assembly on Orthodoxy in the parliament’s plenary chamber on June 20.

He said the relationship between the government and opposition is “Georgia’s domestic affair” and Moscow “does not intend to interfere.” “However, we cannot be but worried by the attempts of certain radical representatives of Georgia’s political elite to ignite Russophobic attitudes, to quarrel our nations,” Lavrov said.

He noted, these politicians “hardly ever think of the harm” they are causing to their country and the welfare of their nation with their actions, which to some extent “depends on the quality of economic and humanitarian ties with Russia.”

We hope that the Georgian officials will manage to stabilize the social-political situation in the country and eradicate the current security threats that Russians are facing,” he said.

According to Lavrov, in this case, the sanctions against Georgia, including the ban on flights might be cancelled. “We want to be friends and to cooperate for the welfare of Russian and Georgian citizens,” he stated.

Lavrov thinks that people of Georgia do not consider Russia as their enemy, and that “unfortunately, today we see how certain politicians of this country are competing in anti-Russian rhetoric to achieve their narrow, opportunistic goals.”

“I am sure everything will return to its place, and good neighborly relations between our countries will be restored,” the Russian FM said.

Vladimer Konstantinidi of the Georgian Foreign Ministry said in response to Lavrov’s remarks that safety of foreigners, including Russian citizens, is ensured in the country, and that “to bring the relations out of a deadlock” persisting since the August war of 2008, “it is necessary to start the process of de-occupation.”

However, at the same time, he said, “it is important to preserve the certain progress” that the two countries have achieved in economic and humanitarian directions. “To preserve the above results, the current tension should be defused and de-escalated,” Konstantinidi stated.

Responding to forced departure of the Russian MPs from Tbilisi and the anti-Russian tenor of Tbilisi protests, Russian President Vladimir Putin announced the temporary ban on flights to and from Georgia starting July 8, “to protect Russian citizens from violence or other illegal actions.” He also ordered Russian citizens’ evacuation.

The Russian Foreign Ministry echoed expressed concern “over the aggravation of the internal political situation in Georgia,” and argued that the members of the Russian delegation “were injured as a result of the actions of the radical Georgian opposition employing anti-Russian slogans” – even though there have been no confirmed reports of injuries.

Peaceful demonstrations continue in Georgia with protesters gathering in front of the parliament of Georgia on Rustaveli Avenue at 7 pm every day, demanding Interior Minister Giorgi Gakharia’s resignation. 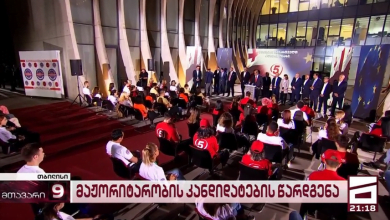