A bipartisan eight-member delegation from the United States House of Representatives is on a visit to Georgia on April 15–17 as part of the House Democracy Partnership (HDP), a bipartisan commission that works directly with partner countries around the world to support the development of effective legislatures.

According to the U.S. Embassy to Georgia, the delegation visited the country “to discuss legislative methods, challenges, and current issues,” as well as to “examine governance issues and factors influencing good governance, including security, stability, and national defense.”

The House Democracy Partnership and the Parliament of Georgia have been working together since 2006. This trip marks the Commission’s 8th visit to Georgia.

On April 16, the delegation met with Parliament Speaker Irakli Kobakhidze. At a joint press briefing with Congressmen Price and Buchanan, following their meeting, Speaker Kobakhidze said the Congressional visit is “yet another demonstration of our countries’ special relations.”

“U.S.-Georgia partnership is close and strategic, based not only on values, but also on concurrence of political interests in the region,” he said. “Our countries are interested in stability and peace in the region so that the countries of this region are able to make choices independently concerning their international and domestic orientation and development.”

The Congressman also said with recent constitutional changes “it is even more clear” that the Parliament “is the first branch of government” in Georgia, and that it is “the first in the frontlines in terms of engaging with people all over the country and translating their aspirations, their hopes, [and] their dreams into policy.”

“We have lots of debates in U.S. Congress these days, but there is no debate about our commitment to democracy and our admiration for Georgia and Georgia’s struggle to establish Parliamentary democracy,” he added.

Today, the Congressional delegation will continue holding meetings with members of Parliamentary factions and committees. Tomorrow they will meet with government officials.

The Congressional visit to Georgia is part of a regional tour in Eastern Europe. The delegation arrived in Georgia from Ukraine. They are to travel to Armenia and Moldova next. 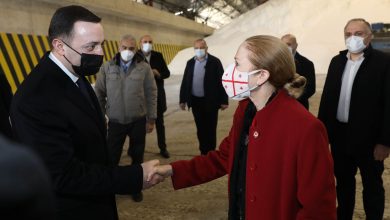