Georgia’s outgoing President, Giorgi Margvelashvili, met with representatives of local election watchdogs on November 27, a day before the presidential runoff, and thanked them for their service.

“I wanted to meet you on the eve of elections and thank you for fulfilling the commitments undertaken before the Georgian society,” President Margvelashvili told the CSO leaders.

“I am concerned over the rhetoric that I hear from various politicians, when you are intentionally targeted for your statements, which are based on your impartial opinions and facts,” he added, apparently referring to the Georgian Dream politicians’ verbal attacks against the country’s leading civil society organizations.

“The way of thinking, where any criticism is perceived as an attack, where you are perceived as an enemy if you do not appease to the government, is one step away from being totalitarian,” he noted.

Earlier on November 27, the President met with representatives of international and local election observation missions to talk on the pre-election environment and the runoff.

The Presidential runoff will be held on November 28, between Salome Zurabishvili and Grigol Vashadze, who finished with 38.64% and 37.74%, respectively, in the first round. 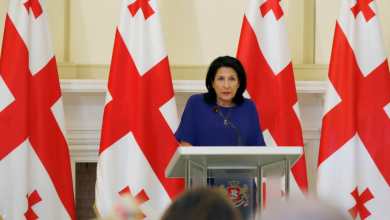