Several Georgian opposition parties, as well as independent politicians, have teamed up with the United National Movement for the October 30 mayoral runoffs in the self-governing cities of Batumi, Kutaisi and Poti, pledging to form coalition cabinets for the city halls. Earlier on October 20, the UNM and several opposition parties made similar pledge for Tbilisi, the capital.

In the port city of Batumi, where frontrunner Giorgi Kirtadze (41.966%) of the UNM will face Georgian Dream’s Archil Chikovani (41.067%), the opposition parties made a concluding presentation.

Lelo’s local leader and elected Batumi Sakrebulo member, Irakli Kupradze called for supporting Kirtadze: “By supporting Giorgi Kirtadze you support a coalition unity of Lelo, European Georgia, Strategy Aghmashenebeli, United Georgia, Droa parties and those civic activists that during the past decade and before defended your city together with you.”

At the presentation on October 25 in Kutaisi, Dekanoidze also pledged to allow civil society organizations to pick the head of City Hall’s Audit Service.

At the signatory ceremony, UNM’s Poti Mayoral candidate, Gigi Ugulava pledged to create a coalition government for the city hall, if elected and hailed coalition governance as the best mechanism for checks and balances.

He said they are also ready to cooperate with former Prime Minister Giorgi Gakharia’s For Georgia party.

Check below our interactive map for the first-round results: 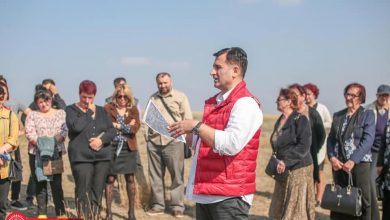