Bzhania and the Russian Deputy PM on October 28 touched upon measures for maintaining a reliable energy supply and the overall situation in the energy sector of the occupied region, according to the Russian Government’s press service. Sokhumi-based Apsnypress news outlet reported that the two also talked about developing of a general gasification scheme for Abkhazia.

According to Apsnypress, the Abkhaz leader’s meeting with the Deputy Secretary of Russia’s Security Council on October 27 concerned with “ensuring border security” and the operations of the “Psou checkpoint,” located on the Abkhaz-controlled sector of Georgia’s border with Russia, in the northwesternmost part of the region.

On October 26, Bzhania and the Deputy Chief of Staff of the Russian Presidential Executive Office discussed the socio-economic development of Abkhazia in 2022-2025, as well as the Russo-Abkhaz cooperation, as reported by the Sokhumi-based news outlet.

The Abkhaz leader left for Moscow on October 25. The visit comes less than two weeks after Bzhania’s previous trip to Moscow, on October 8-16. 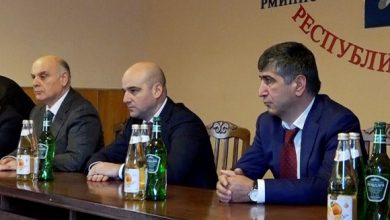