A Defense Ministry official was briefing Dimitri Lortkipanidze, Director of the Moscow-funded Primakov Georgia-Russia Public Center, on “Cartographers’ Case,” a controversial 2020 investigation over attempts of land-ceding to Azerbaijan, according to Georgian media reports on the alleged files of the State Security Service.

RFE/RL Georgian Service reported that Dimitri Kartlelishvili, Chief Specialist of the Cartography Department at the General Staff of Georgian Defence Forces, had allegedly informed Lortkipanidze that the authorities were planning to form a new border demarcation commission with Azerbaijan.

Kartlelishvili supposedly insisted that Lortkipanidze should be named to the commission, and suggested that Nodar Khorbaladze, head of the division, could discuss the candidacy with then-Defense Minister Irakli Garibashvili. According to RFE/RL, the leaked files say that a conversation between Lortkipanidze and Khorbaladze also took place.

Reportedly, Kartlelishvili had also informed Lortkipanidze that former state expert, and one of the key suspects of the “Cartographers’ Case” investigation, Iveri Melashvili, was being threatened by Udabno village locals. Lortkipanidze supposedly responded that he “has a Makarov [pistol] with four magazines” and is ready to put Melashvili “against the wall and go to prison.”

The media outlet reported that in his other conversations Lortkipanidze seemed satisfied the investigation and was convinced the case would lead to the conviction of ex-President Mikheil Saakashvili and UNM-era Interior Minister Vano Merabishvili. Lortkipanidze reportedly claimed their conviction would kick off a “final destruction” of the UNM with arsons of the party’s offices and break-ins into the houses of its leaders.

Police detained Iveri Melashvili of the Foreign Ministry and Natalia Ilychova of the Interior Ministry, former experts of the State Border Delimitation Commission with Azerbaijan, in October 2020 on charges under Article 308 (1) of the Criminal Code of Georgia, involving “actions directed at the violation of the territorial integrity of the country.”

The prosecution argued Georgia faced a threat of losing some 3,500 hectares of its historical territories along the border with Azerbaijan, including parts of the revered David Gareji Monastery complex due to the “criminal activities” of Melashvili and Ilychova.

Melashvili and Illychova denied the accusations. Many of the opposition politicians and local civil society organizations regarded the case as “politically motivated,” pointing to the investigation being launched only weeks before the October 2020 Parliamentary Elections.

The detained experts were released on bail in January 2021. The case has also been admitted by the European Court of Human Rights. 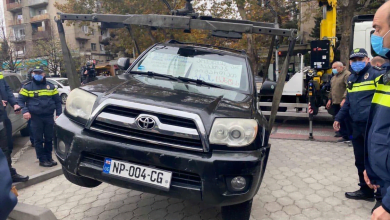 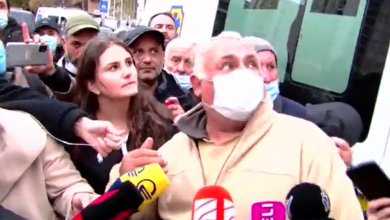 Man Hit with Piece of Concrete at UNM Demo