PM Garibashvili said the meeting at the Government Chancellery, also attended by FM Zalkaliani, focused on key areas of the U.S.-Georgian Strategic Partnership, also regional security and cooperation. “This visit is a clear demonstration of the U.S. increasing interest and engagement in the South Caucasus region,” the Georgian PM tweeted.

The Acting Assistant Secretary on his part praised the progress made by Georgia towards integration with NATO, the Government’s press service reported. The progress will be noted in the declaration of the June 14 NATO summit, according to the same report.

The sides also underlined the importance of keeping Georgia on the “agenda of U.S. relations with Russia,” including during the planned meeting between U.S. President Joe Biden and Russia’s Vladimir Putin.

Also on June 7, at the meeting with Defense Minister Juansher Burchuladze, the parties discussed security issues of the Black Sea and South Caucasus regions, as well as future prospects for defense cooperation after the NATO-led Resolute Support Mission and the Georgian Defense Readiness Program are concluded.

The Acting Assistant Secretary of State held a press conference summing up the progress of the visit so far and touching upon his plans during the South Caucasus tour. He said he will hold meetings with the opposition leaders today evening and then continue his trip to Baku and Yerevan, only to make a second stop in Tbilisi by the end of the week.

The U.S. diplomat said his key message during the meetings was that Georgia’s political leaders must work together in implementing the EU-brokered April 19 deal to ensure the country “succeeds as a secure and prosperous democracy.” That includes working on judicial and electoral reforms, he highlighted.

Stressing U.S. support to Georgia’s territorial integrity and sovereignty, the Acting Assistant Secretary condemned “Russia’s 2008 invasion of the Georgian territories of Abkhazia and South Ossetia.” In the context of the “ongoing” Russian occupation, he said the U.S. is committed to “supporting Georgia’s goal of developing its capabilities to defend itself against future aggression.”

Continuing on defense issues, the diplomat said the U.S. remains committed to the 2008 NATO’s Bucharest Summit statement that Georgia will become a member of the Alliance.

“The United States will continue to stand with the people of Georgia in advancing [their] desire for a democratic, secure and prosperous Georgia,” he stressed. 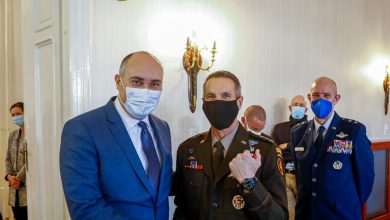